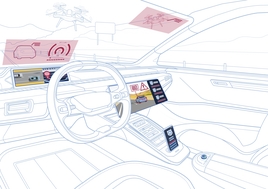 Police and first responder vehicles are expected to undergo a technology revolution, which will include augmented reality, mobile surveillance and remote device control according to transport and connectivity software firm VNC Automotive.

Drawing on the emerging trends in consumer vehicles, and taking the latest applications borne from mobile phone platforms, the UK based software business says it is already in discussion with police forces and conversion specialists about integrating new systems into a car’s existing infrastructure.

“We’re already seeing a focus on app-based solutions, but there is now a shift towards exploring how technology including remote control functionality, the relaying of remote surveillance footage to a car’s dashboard and even augmented reality,” said Philip Handschin, technical consultant at VNC Automotive.

VNC can tap into the systems that OEMs build into cars, utilising existing touch screens and the hardware for communication and connectivity. It can also provide options like the automatic locking of the car when away from the vehicle, the ability to activate remote functions like sirens, cameras and PA systems, or transmitting location information in an emergency using smartphone technology.

It can also enable devices such as laptops to be operated directly from the car’s touchscreen, reducing the need for additional equipment in the car’s interior.

Developments in augmented reality can enable drivers to access navigation, call status and database information without taking their eyes of the road.

VNC also says video feeds from drones or robots could be relayed to vehicles to support police and first responders when working in dangerous environments.

With so much technology in each vehicle, their function moves beyond transport and they effectively become intelligence gathering hubs - passing valuable, first-hand data back to a central command centre and allowing the coordination of teams and other services.

Extending this idea, video and other data can be transmitted and the live feed from every vehicle used to provide a valuable net of surveillance around a serious incident. Recorded and indexed this could prove vital as evidence for later convictions.

Handschin added: “The US market is catered for by the OEMs, with vehicles supplied straight from the production line, but the economics are not the same in the UK. We’re the bridge in the middle, working directly with installers as well as operators to understand their needs and making it cost effective.”

Road users have sent more than 50,000 dash cam recordings of potential traffic offices to police forces since 2017, with one-third resulting in action.

Kent and Essex Police spread the benefits of telematics

The force has received global recognition for its innovative telematics initiative, which helps it cut costs, increase efficiencies and fight crime.

The UK police service has extended its 27-year partnership with Tracker for a further five years.