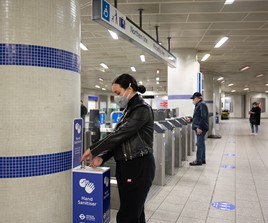 The Government has agreed a £1.08 billion funding package to help Transport for London (TfL) recover from the coronavirus pandemic.

The bailout, which provide financial support for the hard-hit transport authority until December 11, follows two emergency support packages agreed in April and October 2020, and takes total Government’s support to TfL since March 2020 to more than £4bn.

Ministers said that the deal builds on commitments from the previous support packages and sets out further measures to be taken to ensure TfL is financially sustainable by April 2023.

These include progressing efficiency and cost-saving initiatives and identifying new or increased sources of revenue for TfL beyond 2023.

Transport secretary Grant Shapps said the package would support London and its transport network through the pandemic, and ensure it is a “modern, efficient and viable network” for the future.

“Throughout this process, the Government has maintained that these support packages must be fair to taxpayers across the UK and on the condition that action is taken to put TfL on the path to long-term financial sustainability,” he added.

As part of today’s settlement, the Mayor of London, Sadiq Khan, has agreed to: deliver £300 million of savings or new income sources in 2021 to 2022; identify new or increased sources of revenue for TfL of between £500m to £1bn each year from 2023; and prepare a plan to accelerate TfL’s existing modernisation programme of £730m by April 2023.

Furthermore, it wants TfL to review its “generous” pension scheme; prepare a revised medium-term capital investment programme; set aside at least £100m to continue the delivery of healthy streets and active travel programmes; and carry out a joint review with government of demand on London’s transport network to ensure service levels are appropriate.

Khan said TfL had managed to see off the “worst” of the conditions the Government wanted to impose on London.

He added: “The Government is still insisting that TfL look at options to raise a further £500m to £1bn of revenue per year by 2023.

However, Khan is hopeful that as London bounces back from the pandemic, and income from fares continues to increase, the additional fares revenue may be able to meet Government demands.

The Department for Transport (DfT) says that the Mayor has also agreed to work collaboratively on a joint programme for implementing higher levels of automatic train operation on the London Underground, as is the case on many metro systems worldwide.

Over the course of this funding period, at least one London Underground line will be converted to full automation but with an on-board attendant.

The technology has the potential to offer a more punctual, reliable, customer-responsive and safer service that is less susceptible to human error, says DfT.

Khan said that TfL was being “forced” to develop driverless trains. “I’ve made it crystal clear to ministers that we will object to any future requirement to force TfL to implement driverless trains on the London Underground,” he continued.

“It would cost billions of pounds and would be a gross misuse of taxpayers' money at this critical time for our country.”

Concerns over the long-term finances of Transport for London (TfL) could see its credit rating downgraded by Moody’s.