Call for Dart Charge system to be overhauled 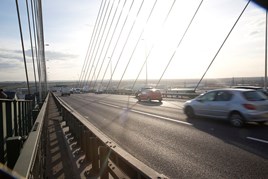 The man behind an alternative payment system for the Dartford Crossing has launched an online petition calling on the Government to demand a refund from Sanef and replace the firm with a new operator.

Billing launched Dartsave and claims to have more than 13,000 vehicles registered on the scheme - 3,000 company cars and vans and privately-owned vehicles and 10,000 heavy goods vehicles.

Dartsave is an alternative way for fleets and private motorists to pay the Dartford Crossing charge and protect themselves against the possibility of a penalty charge for non-payment. Penalty Charge Notices are issued if payment is not made by midnight on the day after using the Crossing.

Fleet operators and vehicle owners must register their car, van or truck with Dartsave at least 48 hours before using the Dartford Crossing

It costs nothing to join Dartsave and there are no subscriptions. The crossing charge is the same as Dart Charge - £2.50 for cars, £3 for two-axle goods vehicles and £6 for multi-axle goods vehicles. But Dartsave offers a 21-day payment period, an email, text message or phone call reminder with a £10 penalty for non-payment.

Dartsave is a registered Dart Charge account holder so immediately a vehicle registered to its account uses the Dartford Crossing a payment is triggered thus protecting fleets and private vehicle owners from non-payment fines.

Billing initially added Dartford Crossing payment as a service to SNAP Account. It offers a range of services to truck operators including parking, vehicle washing, recovery, tyres and roadside repairs removing the need for drivers to carry cash and keep track of receipts.

When the Government made the decision to introduce free flow charging at the Dartford Crossing, Billing said: “I thought it would make everything easier - smoother traffic flow and administration - and it would be good progress.”

However, he now says: “It is a nightmare. The system is not fit for purpose.”

He highlighted how his business had investigated cases in which:

Billing continued: “We are constantly helping customers who’ve been mistreated by Dart Charge and are fed up with the ridiculous errors they are forced to endure.

“There needs to be a major reform of the system because the cost to motorists is completely ludicrous. The system puts a burden on businesses and private motorists.”

A Highways England spokesman said: “The vast majority of the 20 million payments for journeys have been processed quickly and without any issues, and more than 800,000 people are now using Dart Charge accounts.

“We take customer service very seriously and we apologise to everyone who has experienced difficulties with payments.

“We are working with our supplier, Sanef, to make immediate improvements to prevent cases like these from happening in the future.”

Read this week's Fleet News for more on the Dartford Crossing and fleet frustrations.