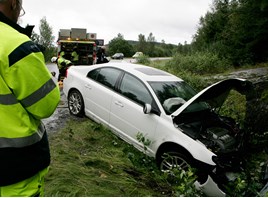 Above average rainfall in certain months of the year has been directly linked to the level of serious injuries sustained by drivers in the UK, according to new Government figures.

The Department for Transport (DfT) and  the Office for National Statistics (ONS) has carried out analysis modelling the impact of the weather on road  casualty statistics.

The report looked at casualty totals on a month-by-month basis for pedestrians, cyclists, motorcycle users and car occupants between 1979 and 2012; then matched these figures to average UK monthly rainfall and temperature figures for the same period.

The results show that above average levels of precipitation (rain, sleet and snow) increases the likelihood for serious injuries for motorists in April, June, July, August, September and November (see graph, below).

Richard Owen, Road Safety Analysis operations director, told Fleet News: “There has been a fair bit of statistical jiggery-pokery going on before the Government finally came up with their analysis and weather is very complicated, but the basic story from this data is that above average levels of precipitation or higher temperatures can expose those travelling to greater levels of risk.

“When people drive, they don’t think about the risk, unless it’s really dramatic like heavy snowfall. If it’s wet on the roads, the average driver does not think about the impact it will have on them. British drivers are used to rain, so it’s become very normalised.”

The analysis led to the DfT and ONS publishing estimates of what road death figures may have looked like over the last five years, if weather patterns were ‘normal’ in each month.

The analysis indicates that in every year except 2010, the numbers killed on the roads would have been lower if it wasn’t for the weather. This is not isolated to road deaths involving motorists, but also includes pedestrians, cyclists and motorcyclists.

“A total of 64 people therefore would not have been expected to be killed, had the weather over the last five years been more consistent with long-term trends,” said Owens.

However, Owen added that while weather analysis provides new insight into how external factors can influence casualty rates, the general trends of actual and weather-adjusted fatalities are very similar.

He continued: “This suggests the downward trend in road casualties experienced from 2003 to 2010 occurred regardless of weather activities and that the slowing of casualty reduction since 2010 also is not solely weather-related.”

Owen said the big take away for fleets was to remind drivers that they need to think when there are extremes in the weather.

He said: “Rainfall will create a greater risk to drivers and hot weather will increase the amount of exposed road users like cyclists and motorcyclists they can expect on the roads.”

Owen said fleets should look at prompting drivers about tyre safety in particular due to the adverse effect rain can have on stopping distances.

Another suggestion from Owen is that the new data could prompt a look by the Government at introducing reduced speed limits when it’s raining, as already happens in France. He suggests this could be a trade-off against increasing the national speed limit to 80mph.