Entries open for 2016 FTA Everywoman in Transport and Logistics Awards 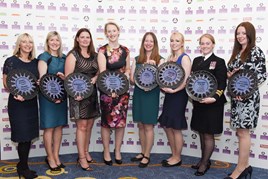 Successful women in the UK’s transport and logistics sector are being encouraged to enter the 2016 FTA Everywoman in Transport and Logistics Awards.

The awards, now in their ninth year, showcase the many roles women are succeeding in whether working hands-on in freight, air, rail or road, or office-based roles that include customer service, transport management, IT, marketing or planning.

The awards are free to enter and nominations are open until February 1, 2016 with the industry’s role models sought in the following categories:

Maxine Benson, co-founder of Everywoman, said: “The industry is growing at a phenomenal rate, and needs more workers to be attracted to the fast-paced, diverse and exciting environment it offers.

"These awards are all about championing the women who are already succeeding, enjoying rapid career progression, job satisfaction and new challenges every day.

"These are the role models who can change the public image of the industry and in doing so ensure more smart, ambitious women bring their talents to it.”

David Wells, chief executive of the FTA added: “The Freight Transport Association is proud to once again be the Title Partner of the prestigious FTA Everywoman in Transport and Logistics Awards 2016.

"Women are essential in every aspect of the UK logistics and supply chains – from drivers and warehouse staff, to transport managers and managing directors.

"It is essential that the logistics industry is able to access a wide talent pool, to meet its need for good quality staff at every level.

"The FTA Everywoman Awards encourages forward-thinking companies that are committed to introducing diversity to the freight industry, and showcases how women can make a career in transport a successful and fulfilling one.”

The winners will be unveiled at a ceremony on May 26, 2016 at The Hilton Park Lane.