Only 26% of SMEs say public transport is convenient 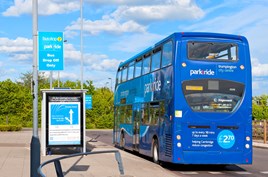 Only 26% of SMEs say public transport provides a convenient option for business travel, according to a study by YouGov.

The poll of more than a thousand UK SMEs, on behalf of Lex Autolease, found that vehicles are crucial for a high proportion of companies, with almost half (4%) saying private transport is important to running their businesses and over a quarter (29%) saying they could not operate without them.

More than one in five SMEs (22%) said their business locations are poorly served by public transport links.

When asked what would happen if they were forced to rely on public transport for day-to-day business travel, 44% said they would be less efficient and 31% said it would cost them more money.

The notable exception is London-based firms, two thirds (66%) of which said public transport was a convenient option for business travel in comparison to just 19% of firms in the North and 12% of companies based in the Midlands. According to the research, being able to work on the move is seen as the main benefit of public transport, cited by 55% of the businesses who said they preferred using it to private vehicles.

Cars and vans remain the clear preference for many SMEs, with just over two thirds (67%) stating that, if given the choice, they would rather use vehicles than public transport. Greater convenience (74%) and reliability (50%) were the most popular reasons for this.

This importance is reinforced by the fact that driving remains a key skill in the eyes of a high proportion of British businesses when recruiting new staff. According to the findings, 59 per cent of firms said holding a valid driving license was an important attribute they looked for in new employees.

“Firms need a reliable, convenient mode of travel to handle those day-to-day demands and keep their workforce mobile. While public transport provides a suitable alternative to driving for London-based firms, who benefit from the country’s most sophisticated transport network, the majority of UK small businesses depend on their vehicles.

“It’s no surprise that, with a high proportion of SMEs preferring to use vehicles for business travel, we’re seeing a rise in the number of firms leasing their cars and vans rather than purchasing outright. By opting to lease, companies can drive away with vehicles they wouldn’t have been able to otherwise afford without having to pay a lump sum, freeing up funds to invest in growing the business.”