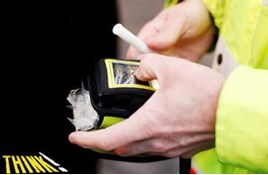 Around 5,500 people fail breath tests between 6am and midday every year, according to new research from Think!

And, with the busiest night for Christmas parties tonight (Friday, December 18) the road safety campaign is reminding drivers about the risks of driving the morning after a big night out.

The figures show that 58% of people who have four or more drinks on a night out sometimes take the risk and drive the following morning, with only a third (33%) aware that they could still be over the limit.

Even though a drink driving conviction can lose drivers their jobs, the most common reason for getting behind the wheel after a heavy night of drinking was to get to work (37%).

Suzette Davenport, National Police Chiefs’ Council lead, said: “The majority of drivers are aware that driving whilst impaired by drink or drugs is not worth the risk, but some do not think about how they will get home or to work the morning after a night out.

“Thinking ahead about getting home or to work safely the following morning is crucial and potentially if you are driving the morning after drinking you may need alternative travel arrangements.

“Driving under the influence is never worth the risk to yourself, to your future and to those you could injure or kill.”

On average it takes around one hour for the body to break down one unit of alcohol, meaning it could take as long as 12 hours for the alcohol from four pints of higher strength beer (or four large glasses of wine) to leave your system.

Research suggests drivers are unaware of the dangers, with a third (33%) of people surveyed mistakenly think that drinking water would make them safer to drive, along with sleeping (28%) and eating a large meal (21%).

Road safety minister Andrew Jones said: “Getting behind the wheel after a big night out is a risk that drivers just should not take.

“Not only are they putting themselves in danger, they also endanger others and their actions can destroy lives.

“The safest way to make sure that your Christmas celebrations this year don’t end badly is to wait until you are sober before you think about driving.”

There are strict penalties if you are convicted of drink-driving, including:

Calculations based on advice on NHS Choices:

One unit is equivalent to 10ml or 8g of pure alcohol. There are roughly: