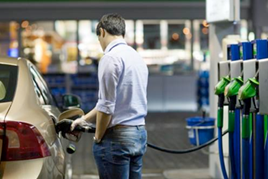 Pump prices look set to end the year at around £1 per litre, raising fears that the Chancellor may look to cash in with a hike in fuel duty.

George Osborne reduced fuel duty by a penny a litre in his 2011 budget and has kept it frozen throughout the last parliament.

However, with a fall in world crude oil prices being reflected on the forecourt, the Chancellor could be tempted to target fuel in the March 16 budget.

He made no mention of fuel duty in last month’s autumn statement, but a clue to future policy was hidden in the small print, with Treasury accounts showing the tax take increasing.

Analysis by the Office for Budget Responsibility (OBR) has led it to conclude that the Government’s policy is to increase fuel duty in line with inflation each year, from April 2016. This is expected to boost Treasury coffers by £2.3 billion between 2015-16 and 2020-21 and offset the effect of further improvements in fuel efficiency which is reducing consumption.

In its Economic and Fiscal Outlook November 2015, the OBR said: “The Government has told us that its policy is to uprate duty rates in line with RPI inflation each year from April 2016. This uprating assumption could be considered a source of policy risk to the forecast, given repeated decisions to cancel planned duty rises in recent years.”

A rise in duty would be seen by many as a mistake. Research published by the Centre for Economic and Business Research showed that cutting pump prices stimulates economic growth, job creation and high street spending.

“The Treasury’s own analysis confirms that there is a direct link between fuel duty and economic growth, so when fuel duty goes up, this impacts negatively on economic growth and vice versa,” said Fuel Watch spokesman Simon Williams.

Compared to recent years, 2015 has certainly been better for business when it comes to managing the cost of fuel for vehicles, with diesel pump prices at their lowest since 2009.

Williams told Fleet News: “The reason why business motorists are currently enjoying lower diesel prices is as a result of the fall in world crude oil prices, which followed the high of $115 a barrel in June 2014.”

That was caused by production levels exceeding demand in the domestic market, leading to speculation that OPEC might intervene to stabilise the price by reducing production.

“Eventually, we saw a six-year low of $45 a barrel in early February, and then two instances of a bounce back up to the $60 level briefly, but the price has been consistently below $50 since mid-October,” added Williams.

“The price reached a six-year low in mid-November and fell further to below $40 a barrel following OPEC’s meeting in Vienna on December 4, where delegates ended speculation and dismissed cutting production to stabilise the price.”

This downward trend is expected to continue and long-term the price of oil is expected to stay low. In fact, in its forecast for 2016, Goldman Sachs suggested it could fall much lower, with $20 a barrel a “possibility”.

OPEC is not due to meet again until June 2016 so, unless an extraordinary meeting is called, production is likely to continue outpacing demand, keeping wholesale prices low.

Williams said: “Looking ahead to 2016, this has made the idea of paying £1 a litre at the pumps for unleaded petrol a reality for the cheapest retailers and we would expect to see the price of diesel also continue to fall.”

Fuelcard provider Allstar has a similar outlook, suggesting that there is no current driver that will change anything in the market in 2016.

Brian Flood, vice president for networks and product at Allstar, said: “The fact is there exists an oversupply of oil from OPEC.

“Unleaded should remain in the same range of 102-112 notwithstanding any festive promotions.

“There’s nothing to suggest that these figures will change, unless there was a serious external factor which threatened the market.”

In light of falling oil prices, Morrisons cut the price of petrol to below £1 a litre last weekend – the lowest UK level, excluding special promotions, since 2009.

The supermarket chain announced it would be selling petrol at no more than 99.9ppl and cutting diesel by 1ppl. Asda, meanwhile, ran a weekend 99.7ppl promotion on petrol, with diesel at 103.7ppl

With the average price of diesel at 108.46ppl and unleaded at 105.79ppl, campaign group Fair Fuel UK said there was no excuse for other retailers not to follow suit.

“But they are even more angered by the fact that independent garages are not passing on the latest falls in wholesale levels to the pumps.

“And, even more galling to our 1.2m supporters, diesel continues to be higher priced than petrol when its wholesale cost is less.

“This is nothing but pure greed through consumer exploitation.

“The Competitions and Market Authority should investigate immediately.”

Drivers were asked by Fleet News at the start of the year what they thought a litre of diesel would cost come the end of 2015 (see chart, above).

Williams said: “The 23% of those who responded to the Fleet News poll suggesting the price of a litre of diesel would fall to between £1 and £1.10 by the end of the year, are most likely on the money.

“However, a crucial factor is the weather. As the oil that is used to produce diesel is effectively the same that is used for domestic heating oil, the mild winter we are currently experiencing means there is less demand for heating.

“But as and when winter properly arrives and we see the temperature plummet, the demand for that oil will rise, and with it the price of diesel at the pump.”