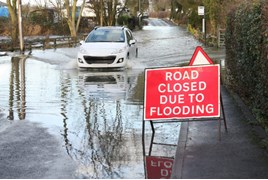 The Government will provide £40 million to help repair flood-damaged roads and bridges in Cumbria and Lancashire.

The additional cash and the deployment of a Highways England construction team are part of the Government’s wider commitment to help support communities dealing with the effects of the extreme weather over recent weeks.

Transport secretary Patrick McLoughlin said: “We are determined to help families and businesses in Cumbria and Lancashire get back on their feet as soon as possible.

“This has been a very difficult time and I have enormous sympathy for people flooded out of their homes at Christmas. We will continue to stand shoulder-to-shoulder with the local communities as they strive to return to business as usual.

“A good local transport system is the lifeblood of this region and Highways England’s engineering expertise, backed by £40 million funding from the Department for Transport, will support the work already being done to repair local roads and bridges damaged by the storm."

Highways England will start design and construction work to repair the A591, and investigate what is required to restore Pooley Bridge and Eamont Bridge, in Cumbria, in the New Year. This follows assessment work that has already been undertaken.

Jim O’Sullivan, chief executive of Highways England, said: “We understand the difficulties of people trying to travel in an area hit by flooding and we are doing everything we can to help Cumbria.

“On behalf of Cumbria County Council we and our supply chain partners will be working to rebuild the damaged section of the A591 as soon as possible so it is safe for road users, and to investigate what we can do to repair the A6 Eamont Bridge and the B5320 Pooley Bridge; this will allow the council to concentrate on other priorities to help its residents.”

The Government says it has been supporting the efforts of the local authorities ever since the extreme weather hit, as they have begun repairing the region’s transport network.

This latest announcement builds on the £2m that it pledged in the initial aftermath of the severe wet weather to enable Cumbria and Lancashire authorities to carry out an initial assessment of what repairs were required to roads and bridges.

The DfT says it will continue to work closely with the local authorities in Cumbria and Lancashire in recovery efforts.

Highway England has already been assisting Cumbria with the assessment of the extent of flood damage to the local transport network.

They will now focus on three major engineering projects across Cumbria:

·         Rebuild the crucial A591, the road which runs north to south through the heart of the Lake District, to allow it to be reopened as soon as possible

·         Investigate what can be done to replace Pooley Bridge, situated at the northern end of Ullswater, after it was completely swept away by flood water

·         Examine how the Eamont Bridge, near Penrith, can be rebuilt to be more resilient against future flooding

The new funding package is in addition to the £6.1 billion the Government has committed to local authorities across England to help maintain the condition of local roads, between now and 2021.