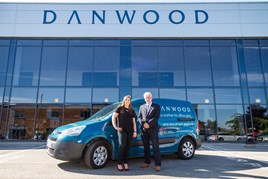 Danwood Group has reduced its fuel costs by 13.8%, on top of fluctuations in pump prices, after introducing a TMC and Barclaycard product.

The provider of managed print and document-centric services runs a fleet of 400 company cars, 160 cash-allowance cars and 40 commercial vehicles.

Geoff Wray, head of fleet and facilities, at Danwood made introducing a new fuel and mileage solution a priority by 2014 after the company’s existing fuel card provider had just introduced a flat fee on pump transactions that cost it £1.20 every time one of their drivers refuelled a vehicle.

This meant it would cost the fleet an extra £35,000 a year merely to keep using the cards.

Paying fuel expenses was another issue. The company had outgrown its manual, spreadsheet-based mileage reporting process to the point where administering fuel expenses took up 25% of the fleet executive’s time every month.

Even then, it was not possible to check hundreds of spreadsheets closely to verify whether trip records were accurate and complete.

Following a selection process, the TMC and Barclaycard solution was implemented on December 1, 2015.

Wray said Danwood saw an immediate reduction in fuel-related costs because there are no transaction charges with the Fuel+ card.

At the end of the first quarter of 2016, a review of fuel and mileage costs showed that, the company's costs had fallen 13.8% year-on-year on top of fluctuations in pump prices.

Around half the direct saving came from more efficient reimbursement of private fuel costs by the drivers and enhanced VAT recovery (the new system enabled Danwood to switch from using the VAT scale charge to recovering the actual VAT, which was greater).

The other 50% was delivered by TMC’s cash allowance scheme for Danwood’s employees that take a car allowance instead of a company car.

Both the driver and the company benefit from maximising the amounts paid tax-free. TMC performs the monthly calculations and creates the payroll reports based on captured mileage.

“It took a few people, myself included, a while to fully understand the tax adjustment scheme,” said Wray. “But now I am just getting positive feedback. Drivers in the scheme are saying: ‘I am so much better off every month’ and ‘Why didn’t we do this before?’”

Adopting the TMC-Barclaycard solution has allowed Danwood to resume to deducting private fuel from drivers at actual cost.

“Previously we had to use AFRs due to the low quality of data. It was a massive task for me every month to try to work out individual actual pence-per-mile rates to recharge people at,” said Wray.

“There were a few questions from drivers at first but people are now saying they are better off. The rate they are actually achieving in the vehicle is less than the advisory rate so the cost of their private mileage deduction is smaller.”

The new solution has also freed up a week per month of extra time for fleet executive Charlotte Strong - around 40 hours that were previously committed to processing manual mileage reports.