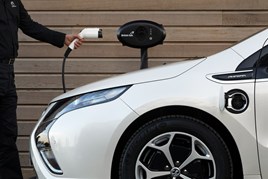 A £7.5 million workplace charging scheme, due to be launched this autumn, has been welcomed by the fleet industry. The cash, part of a £35m package to boost the uptake of ultra-low emission cars and scooters, was recently announced by transport minister John Hayes.

It will be open to eligible private and public sector workplaces in the UK to support the installation of charging infrastructure for their staff and fleet to use.

“The issue of ‘range anxiety’ has considerably lessened as electric and hybrid ranges continue to increase but accessing convenient charge points is still a challenge for many – especially for those where a charge point at home is not an option – so any increase in workplace or on-street charge points can only serve to increase the take up of this type of vehicle.”

A further £2.5m is being made available to councils who commit to installing charge points on streets near homes without private off-street parking.

Fleet buyers and company car drivers are leading the uptake of plug-in electric vehicles, with businesses responsible for 72% of electric vehicle registrations in the first half of this year.

However, Gerry Keaney, chief executive of the British Vehicle Rental and Leasing Association (BVRLA), believes businesses will only be able to continue this growth with fiscal support from the Government.

“Workplace charging is a very positive step, but there is a lot more that policymakers can do,” he said.

“We need them to narrow the CO2 gaps between tax bands at the lower end of the company car tax scale and make a bigger commitment to in-life incentives for users of plug-in electric vehicles.

“Employers also need more clarity on how they should treat business travel reimbursements for electric mileage.”

In addition to the charge-point cash, an initial £3.75m is being made available for electric two-wheelers, with up to 20% off the cost of an electric motorcycle or scooter. Buyers will be able to claim a maximum discount of £1,500.

A £20m competition to help councils roll out charge points for ultra-low emission taxis will also be launched and a further £2m has been awarded to public and private sector organisations to deploy hydrogen fuel cell vehicles.

Fourteen public and private sector fleets from around the country, including Amey, Aberdeen City Council, Europcar and Arval, will receive a share of the cash to fund 50 hydrogen-fuelled cars and vans, more than doubling the number of these types of vehicles on UK roads.

Arval is taking part in the UK’s largest hydrogen fleet car trials to date, the Hydrogen Hub initiative, which will see fuel cell technology tested in a wide range of domestic, commercial and transport applications in Swindon, where Arval’s UK head office is based.

Initially, two vehicles will be leased to local companies by the leasing firm, subsidised by the Office for Low Emission Vehicles (OLEV); the National Trust will be operating a Hyundai ix35h and Nationwide Building Society will take delivery of a Toyota Mirai.

A Mirai will also be joining Arval’s own company fleet. Other vehicles will also be delivered to local companies as part of a linked bid structure to which Arval will provide management support.

Paul Marchment, SME development manager at Arval UK, said: “The first cars should be with their users by the end of this year and have been subsidised to a level that makes them cost-comparable with a normal company model.”

They will cover a minimum annual mileage of 10,000-15,000 miles over their three-year lease, with data gathered via telematics to help the leasing company offer customers’ better insight into their use in the future.

The Hydrogen Hub initiative aims to have a total of 11 company-run fuel cell cars operational in Swindon by the end of this year and 50 by the end of 2017.