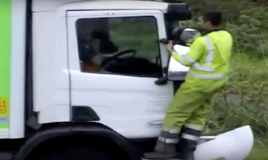 Police are investigating a terrifying road rage attack on the M62 where a vehicle was attacked after a collision.

At around midday on November 9 police were called after two men in a lorry were attacked by a man in a pick-up truck on the M62 in Eccles.

The two vehicles had collided as they both accessed the M62 motorway from the anti-clockwise M60, and both had pulled onto the hard shoulder.

The two men, believed to be delivery drivers for the Co-op, got out of their lorry to swap details with the driver of the flatbed truck, however the man became abusive, then hit the driver before purposely reversing into the lorry.

The driver of the pick-up truck tried to get into the cabin of the lorry but when the driver and passenger locked themselves inside, he smashed the window with a spade.

PC John Cavanagh from GMP’s Roads Policing Unit said: “This attack was unbelievable, and has been clearly captured on CCTV.

“Luckily neither of the men were seriously injured however they have been left terrified by the incident.

“The driver and passenger in the lorry were just trying to get on with their day’s work when they collided with the man in the pick-up truck, accidents happen and they were attempting to deal with the situation in an appropriate manner. No one could have anticipated the level of violence they would then fall victim to.

“I am appealing for anyone who may recognise the driver of the pick-up truck to get in touch as soon as possible. It was broad daylight and the man can be clearly seen, someone must know who he is.”

Fleet Poll
Will the Government continue its freeze on fuel duty in the March Budget?
Vote
View all
148