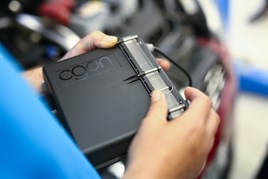 British manufacturer CGON has released a new range of hydrogen additive products that claims to reduce engine emissions by up to 80% and offer fuel savings of up to 20%.

Developed over the past eight years at its research and development facility in the United Kingdom and tested extensively on the road, CGON’s independently-verified technology significantly reduces emissions such as CO2, HC, NOx, PM and PN.

The 100% recyclable ezero hydrogen additive box is fitted within the engine bay and can be used on any fossil fuel engine, from petrol to diesel to LPG.

CGON says the system works by introducing small amounts of pure hydrogen directly into the inlet chamber where it combines with the fuel-air mixture.

The resulting hydrogen-fuel-air mix – which has a cooler burn that’s faster than a conventional mix – creates a more complete combustion cycle.

CGON says this means that almost all waste gases are eliminated, drastically reducing harmful emissions, and because the technology increases engine efficiency, less fuel is used, with real-world drivers reporting savings of up to 20%.

In addition, in a diesel engine, the much cleaner emissions also put less stress on the particulate filter resulting in reduced maintenance and time off the road.

Simon Johnson, CEO of CGON, said: “Air quality, especially in cities, is one of the great challenges of our time. You can’t open a newspaper without reading about vehicle emissions in urban centres around the world.

"More than 100,000 cars fail their MOT each month on emissions alone in the UK. CGON’s ezero technology tackles this problem head-on by reducing particulates and NOx.

"We have completed testing of hundreds of vehicles at certified MOT stations and recorded an average 80% reduction in overall emissions, while also giving the consumer the added benefit of improved fuel efficiency.

"Independent testing by Emissions Analytics verifies our own testing, showing a huge reduction in emissions.

“Our patented technology generates hydrogen at an extremely low current with no hazardous bi-products.

"We have completed millions of miles of testing and the result is a credible and independently verified, low-maintenance product that could literally change the air we breathe, improve air quality on a global scale and save thousands of lives every year."

CGON’s ezero products don’t store any hydrogen onboard at all, but create small amounts on-demand.

The ezero box is topped up every 6,000 miles with CGON’s patented electrolyte solution (a 250ml pouch of electrolyte costs £5).

CGON produces three different variants of the ezero range, from the ezero1 aimed at smaller engines used in passenger cars and vans, with the ezeroH1 targeted at larger vehicles such as small coaches and light goods vehicles in the 7.5-tonne range, all the way up to the ezeroH2 model for the HGV and bus market.

The company’s flagship consumer product, the ezero1 has been independently tested on the road by Portable Emissions Measurements Systems (PEMS), Emissions Analytics.

The ezero1 can be fitted to any internal combustion car in approximately one hour. The box costs £459 including VAT and fitting. The CGON cells have a 12-month guarantee.