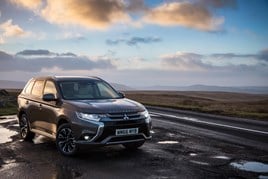 The Mitsubishi Outlander plug-in hybrid has held its lead over the pure battery-electric Nissan Leaf to remain the most common ultra-low carbon car on the UK's roads.

Steve Gooding, director of the RAC Foundation, said: “These figures show that despite the slump in sales of new diesel cars we are still waiting for the moment when the ultra-green vehicle market really takes off.

“Electric vehicles are becoming more common they are yet to become an everyday sight. While the 50% year-on-year growth is encouraging the low overall total shows why the government commitment to incentives made in the Budget is so important.”

Diesel registrations have fallen sharply – down 16% year-on-year – and have only partially been offset by rises in registrations of petrol and alternatively fuelled vehicles.

Vehicles that are, or have been, eligible for the government’s plug-in car and van grant schemes and which were on the road in the UK at the end of Q3 2017.

Two in three fleets nervous about purchasing a car without an electric powertrain, says Kia