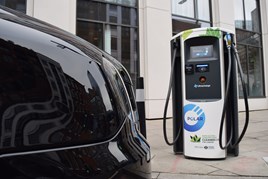 The number of electric vehicle chargepoints available to drivers has increased in both London and Southampton.

Chargemaster has expanded its Polar network to 70 rapid chargers within the M25, while Southampton City Council has installed 30 new charging points in five multi-storey car parks.

The council is planning to introduce further charging facilities over the coming months as it develops a city-wide network.

Christopher Hammond, cabinet member for sustainable living at the council, said: “The city council is fully committed to reducing air pollution from exhaust emissions from vehicles in the city.

“Facilitating the uptake of electric vehicles is part of our Clean Air Strategy and these 30 chargers are the first of a city-wide network which we’ll deliver.

“As well as these 30 chargers, other incentives include a 90% reduction in annual city centre season ticket parking fees, and offering taxi drivers cashback on licensing fees if they replace older more polluting vehicles with low emission alternatives.

“So far this has seen 16 diesel taxis removed from our streets to be replaced by much less polluting hybrid cars.

To use the electric vehicle chargers in the multi-storey car parks, users register in advance on NewMotion where they can order a charge card. Drivers need a standard Type 2 Socket.