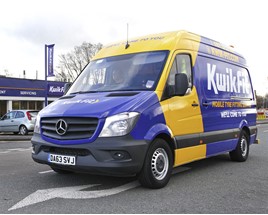 Communication and clarity with company car and van owners and drivers will be more critical than ever with this month’s introduction of MOT changes, says Kwik Fit.

The new rules, which come into effect on May 20, potentially contradict the established Road Traffic Act, says the automotive repair company.

The changes will mean that instead of vehicles being given a ‘pass’ or ‘fail’, defects found will be categorised as ‘dangerous’, ‘major’ or ‘minor’ with the first two resulting in a test failure.

However, under the Road Traffic Act 1988 vehicles must be kept in a roadworthy condition with drivers failing to comply facing a maximum £2,500 fine and three penalty points on their driving licence.

"Communication is critical to comply with both the MOT and Road Traffic Act rules as well as individual fleet policies.

“We will make vehicle owners and maintenance decision makers aware of defects whether ‘dangerous’, ‘major’ or ‘minor’ and empower them to make the decision on authorisation of any repairs.

"It is worth noting that all ‘dangerous’, ‘major’ and ‘minor’ faults along with any MOT tester additional advisories will be published immediately following the completion of the MOT test on the Driver and Vehicle Standards Agency (DVSA) site.

"It is then up to vehicle owners and maintenance decision makers whether the vehicle is allowed to continue to be driven or a repair is undertaken. If a vehicle is driven on the road with a known defect, drivers could be subject to road traffic offences.

“If a vehicle is presented for its MOT early, the Road Traffic Act would be enforced if there is a noted defect. If the vehicle is driven on the road and is stopped by the police, or is involved in a crash, then the law will intervene.”

Fleets reminded of MOT rule changes to take effect from May