Rental and leasing industry contributes £49bn per year to economy 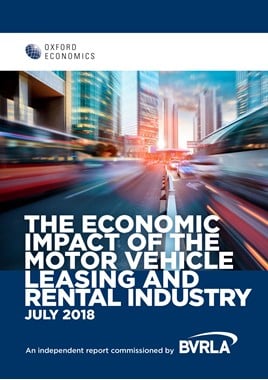 The UK's vehicle rental and leasing industry contributes around £49 billion per year to the UK economy, according to a new report published by the BVRLA

The study also found the industry supports more than 465,000 jobs and generates £7.6bn in taxation annually.

Gerry Keaney, chief executive of the BVRLA, said: "This report underlines the role that rental and leasing plays in the UK economy, particularly when it comes to supporting domestic vehicle and engine makers.

“With its huge spending power and expertise, the industry will play a crucial role in delivering the UK’s transition to connected, autonomous and zero-emission road transport in the years ahead.”

Commissioned by the BVRLA from research organisation Oxford Economics, the study provides robust, independent data on the size, scope and importance of the vehicle rental and leasing industry.

The £49bn takes account of the operations of the industry itself, the UK-made vehicles and engines it purchases, the activity of UK dealerships and its impact on the used car market.

The industry employs 52,700 people directly and contributes £23.9bn from rental and leasing activities. This contribution is higher than that seen in many other sectors because of the reliance on rapidly depreciating capital goods.

Rental and leasing companies spent an estimated £30bn on buying more than 1.8 million vehicles in 2017, which includes £5.4bn spent on 304,000 UK-assembled cars, vans and trucks.

This represents 17% of all vehicles assembled in the UK and means that they were responsible for 83% of these vehicles sold domestically. The industry also purchased 418,900 vehicles with UK-made engines.

Most vehicle purchases are conducted through motor dealers and in 2017, this activity supported a £1.6bn million contribution to GDP, 25,400 jobs and £400m in tax receipts for the UK Government.

Similarly, the rental and leasing industry is estimated to have replenished 25% of its fleet in 2017, supporting auctioneers and dealerships and generating a £1.7bn contribution to GDP, 28,200 jobs and £469m in tax receipts.

Nina Bell, managing director of Avis Budget Group for the UK and Scandinavia, and Zipcar UK, has become the first female vice-chair of the British Vehicle Rental and Leasing Association (BVRLA).

BVRLA has published the latest Fleet Technology Report, providing new insight into the status of the connected vehicle market and the impact it is having on the vehicle rental and leasing industry.

The British Vehicle Rental and Leasing Association has launched a pledge that will see its members’ plug-in vehicle fleet size from 50,000 today to 720,000 by 2025.