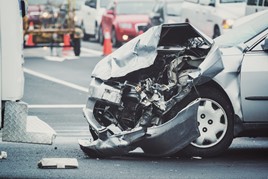 Ford and Vodafone are testing connected vehicle tech that can automatically warn other drivers of accidents ahead, clearing a path for emergency vehicles.

The system is designed to create an emergency corridor along which fire engines, ambulances and police vehicles can reach their destinations more quickly; and is being trialled as part of KoMoD (Kooperative Mobilität im digitalen Testfeld Düsseldorf) – a €15 million project for the practical testing of new connected car technologies and automated driving.

“Connected and automated driving are key technologies of the future,” said Gunnar Herrmann, CEO of Ford of Germany.

“Ford has a long history of developing and testing vehicle to traffic infrastructure and vehicle to vehicle communications that can contribute to greater road safety and efficiency across the world. Together with Vodafone and in cooperation with the other companies involved, we will gain decisive insights on the Düsseldorf testing grounds to further advance the networking of vehicles.” 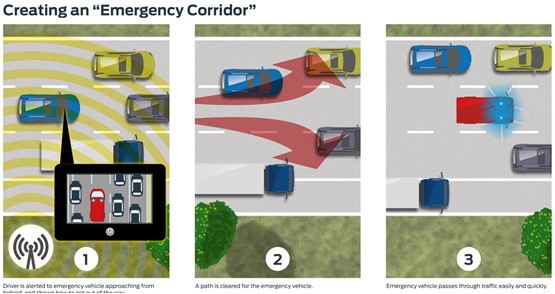 Already, in the event of an accident, eCall functionality, which is available on the all-new Focus, can automatically call emergency services, and enables occupants to do so manually by pushing an SOS button inside the car.

Anticipating a future where all vehicles communicate with each other via mobile phone networks and embedded modems, Ford and Vodafone are now exploring how eCall Plus might also inform other drivers that there is an accident ahead, across a range of up to 500 metres. Attending emergency vehicles would also issue the warning, using in-car displays to show the correct emergency corridor formation.

On two-lane roads emergency corridors are created in between the two lanes by drivers pulling over to either side. If there are more than two lanes, then it depends whether the rule of the road is to drive on the left or the right.

For those countries where motorists drive on the right, the corridor is created between the lane on the far left and the lane directly alongside.

But even in those countries where it is already a legal requirement for drivers to take this approach, many drivers still do not comply. In Germany, a survey revealed that almost half of all drivers don’t know how to form an “emergency corridor”.

The new technology complements Emergency Vehicle Warning technology that Ford is also testing at KoMoD. This sends a signal from the ambulance, fire engine or police car directly to nearby drivers, so that they will know the exact location of the vehicle and how far away it is. This can be especially useful in urban areas, for example at a crossroads where it might be difficult for drivers to immediately know where the siren is coming from.

“The digital revolution is bringing new forms of mobility which may help save lives on our roads,” said Hannes Ametsreiter, CEO, Vodafone Germany.

“When cars communicate with each other, our rescue teams get a clear path forwards, so they can provide the right help at the right time, in situations when every second counts.”

In all, 90 local authority areas will have one or more stretches of road where there is no voice signal available.

A significant knowledge gap in the understanding of connected and autonomous cars has been revealed in new research from Avis Budget Group.