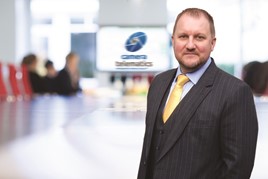 Camera Telematics has announced the UK launch of Street Angel, following its successful launch in Ireland in 2016.

Within 18 months of its launch in Ireland, Camera Telematics says that more than 200 businesses have adopted the technology to mitigate their risk.

Mark Stamper, group managing director at Camera Telematics, said: “Street Angel gives fleet operators, not just peace-of-mind in ensuring safer driving and complete protection against fraudulent insurance claims on our roads, but also the reassurance of having the most advanced onboard vehicle camera available.”

When it comes to minimising costs after an incident involving a third party and irradiating the opportunity for false insurance claims, the speed of timing and recording the right information are essential, it says.

Research from one of the UK’s leading accident management providers estimates that failing to capture third-party information can inflate overall incident costs by 965%, turning a £1,000 bill into £10,650, while AXA Insurance has seen claims that should have been £5,000 spiral up to £50,000.

Street Angel, says Camera Telematics, includes more than 20 features all on one device, helping to mitigate these costs. They include:

• An SD-card free device with 128GB of internal memory – SD Card Free - Removing the possibility of SD card failure, or the card going “missing” which will prevent the camera from working when needed most.

• The increased memory size (most cameras are the 32GB) also means more footage can be retained for longer, increasing the chances of retrieval, using the video on demand.

• 24/7 Event monitoring as standard – All serious events are reviewed by a team of support staff, which also helps keep the camera/cameras maintained as they will highlight issues such as cameras being covered/obstructed and maintenance issues.

• Scalable – up to three cameras – using the external hub the solution is scalable and upgradable to a three-camera system, with flexible options for additional cameras.

Using 4G connectivity the Street Angel continually transmits data associated with vehicle speed, GPS position and shock axis sensor to a designated SSL encrypted server ensuring data is safe and secure, and in the event of a collision, the unit automatically transmits all its data for that event.

Camera Telematics says that the data is admissible evidence, should it be required to defend or mitigate an insurance claim.

A quarter (25%) of drivers would like to see dashcams made compulsory in cars, new research from GoCompare Car Insurance suggests.

Police get funding to use dashcam evidence

Measures to combat road rage and encourage more mutual respect between road users have been released in a two-year Government action plan.

Two-thirds of drivers could be using dashcams in the coming months, according to a new poll from the AA.