Unwell and injured motorists are risking it on UK roads, research reveals 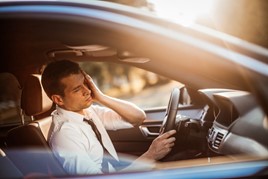 A survey of 1,000 drivers has found that 77% had driven while experiencing some form of adverse health conditions or symptoms, according to HPI research.

Headache (41%), runny nose (36%) and sore throat (34%) were the most common symptoms that drivers risked driving while experiencing.

Shockingly, on in 20 (5%) said they had driven with impaired vision, and 1% have previously driven while suffering with broken bones.

The findings highlighted that more than half of UK drivers (59%) stated that they have an illness that requires prescribed medication, and 45% are potentially putting themselves at risk.

A third (34%) admitted that they have driven whilst taking medication that explicitly advises that they do not drive, and another 11% were unsure if they should drive or not with their medication.

Of those who had driven against medical advice before, 20% admitted that regularly do so at least once a week.

City splits in the findings also suggested that the worst offenders for driving whilst on medication included London, Bristol, Manchester, Glasgow and Birmingham.

When it came to professions, those working in the legal were the least compliant, followed by HR/recruitment, medical professionals, creative industries and IT workers.

Dr Luke James from Bupa UK said: “Medications can affect people in different ways, so it’s important to only take them in accordance with the advice included in their accompanying leaflet.

"Additionally, you should talk to your doctor about any possible side effects before starting or changing your dosage, including whether they’re likely to affect your driving safety.

“If impaired driving is a potential side effect, you should avoid driving for the first five days of starting or changing your dosage and speak to your doctor to establish whether you’re both happy that you’re safe to get back behind the wheel.”

There are certain prescribed medicines that can affect driving ability in some people, including:

HPI Check’s consumer marketing director Fernando Garcia said: “With so many drivers on the road in 2019, it’s hard to believe how many are potentially putting themselves and others at risk by not following simple medical advice.

“What stood out to us the most, was the shocking stat that more than three quarters of the drivers we surveyed had driven whilst experiencing adverse health conditions, and 329,000 had even done so with broken bones.”

Jaguar Land Rover has developed a technology that will be able to tell if vehicle occupants are feeling unwell and adjust settings to combat motion sickness.

Health: are you fit to drive?

Ensuring drivers are in good health has an important part to play in road safety. Andrew Ryan looks at three key areas