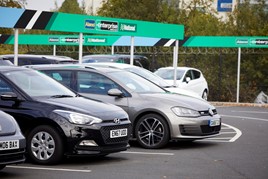 Employees at Enterprise Flex-E-Rent and SHB Hire have been told their jobs could be at risk as the company integrates the two businesses.

Branches of the businesses could also be closed, with some depots serving the same areas.

The rental company would not disclose the number of staff at risk, or which depots could be shut down, but Fleet News sources have suggested that up to 300 staff and nine depots could be affected.

An Enterprise spokesman told Fleet News: “We want to ensure that we have held meetings with all impacted employees before we confirm numbers of jobs and depots affected.”

Enterprise Rent-A-Car UK announced it was buying SHB Hire last March, making it one of the largest commercial vehicle rental fleets in the country, with more than 45,000 vehicles.

The acquisition, it said, would enable Enterprise to "deliver increased value and choice to its Flex-E-Rent customers". It followed Enterprise's strategy to diversify its Flex-E-Rent business both organically and through acquisition (it acquired commercial vehicle provider Burnt Tree in 2014).

The spokesman explained: “Following the acquisition of SHB Hire by Enterprise last year, the management teams of both businesses have been carrying out a process to assess how best to integrate the SHB Hire and Enterprise Flex-E-Rent operations.

“Earlier this week, we informed staff that we would start a consultation on the integration proposals and that some jobs and depots were proposed to be at risk.”

All the staff whose jobs are at risk have received letters setting out the consultation process. Enterprise stressed that no final decisions have been reached.

The spokesman continued: “We will work closely with everyone affected to help them find other roles within the wider Enterprise business including Flex-E-Rent operations, or new opportunities outside of the business.

“All depots which have been put at risk of closure are near to other existing locations where the business can be transferred to while still offering the opportunity for future growth.”

The intention is for the process to be completed by the end of March.

When announcing the deal last year, SHB Hire chairman, Mike Street, who entered the Fleet News Hall of Fame in 2018, said that handing over SHB Hire had been a “difficult decision”.

However, he said he was confident that the deal with Enterprise Flex-E-Rent provided an “outstanding opportunity for both companies’ customers and employees”.

Speaking to Fleet News in November, Adrian Bewley, director of business mobility, UK and Ireland at Enterprise Rent-A-Car, said that they were at the early stages of integrating the business.

“Bringing it all together will take time as we’re mindful of what created such a wonderful business and we recognise the importance of retaining those qualities,” he said.

Enterprise Rent-A-Car UK has signed a deal to acquire SHB Hire, which will make it one of the largest commercial vehicle rental fleets in the country.

Enterprise Holdings has announced that president and chief operating officer, Chrissy Taylor, will be the company’s new CEO.