Congestion charge could be expanded to north and south circular 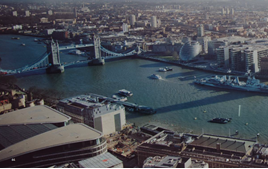 A deal to provide emergency funding to Transport for London (TfL) could rely on the expansion of London’s congestion charge zone.

However, an initial bailout from the Government in the wake of the coronavirus crisis has already seen prices increased and its hours of operation extended.

At the time, TfL described that as a ‘temporary’ price increase as a result of a funding agreement between the Government and the transport authority.

It secured a £1.6 billion bailout from the Government after warning it could have to cut services.

TfL has asked for a £5.7bn package to prop up services for the next 18 months, after passenger numbers and revenues have fallen after the March lockdown.

An interim funding measure was agreed for the next fortnight with ministers last Friday, but the Mayor of London, Sadiq Khan, has hit out at Government proposals for further TfL funding.

He labelled the plans “ill-advised and draconian”, and warned it would “punish Londoners for doing the right thing to tackle Covid-19”.

The extension to the £15 congestion charge zone would go live in October next year, when the expanded ULEZ is also introduced due to be introduced covering the same area.

It would see the zone expanded to cover approximately four million more Londoners.

The Mayor also says that the Government wants to increase TfL fares by more than RPI+1%.

A further Government proposal is to introduce a new council tax precept charge in the capital ­­– effectively increasing council tax by an as yet unspecified amount for all Londoners, regardless of whether they use public transport, claims Khan.

He said: "I simply cannot accept this Government plan, which would hit Londoners with a triple whammy of higher costs at a time when so many people are already facing hardship.

"The Government should be supporting Londoners through this difficult time – not making ill-advised and draconian proposals which will choke off our economic recovery.

"Ministers already forced TfL to bring forward proposals to increase the cost and hours of the congestion charge in May – now they want to expand it to cover four million more Londoners.

"They also want to significantly increase fares in London and hit all Londoners with a regressive new tax.

"It is clear that difficult choices lie ahead to plug the huge gap the pandemic left in TfL's finances. I have been ready to talk with Government about how the necessary funds can be raised – but a proposal which singles out Londoners for punishment is completely unacceptable, as well as making no economic sense.

"I urge Ministers to come back to the table with a revised proposal which does not punish Londoners for doing the right thing to tackle Covid-19 – and to publish their review into TfL's finances in full. I remain ready to talk."

The Department for Transport (DfT) says talks over a settlement were ongoing.

Transport for London (TfL) has furloughed 7,000 staff members due the dramatic reduction in passenger numbers caused by the Coronavirus lockdown.