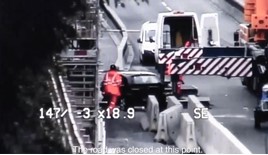 To mark Road Safety Week (November 16-22), Highways England is urging all roadworkers to ensure they report any and all incidents of both incursions and abuse.

Furthermore, it says there were nearly 6,500 incidents where vehicles ignored traffic restrictions and entered a traffic management area – so called incursions – between October 2017 and October 2020 – an average of 175 a month.

Mark Byard, director of health and safety at Highways England, said: “Our roads keep the country moving, keep families connected and businesses in business, so our roadworkers are vital to everyone’s wellbeing, and their wellbeing is vital to us.”

Byard says that 175 reported incursions a month is “far too many” and urged members of supply chain to report all incidents of incursions and abuse. “Together we can make a difference,” he said.

Highways England has recently lead a cross-industry project to raise awareness of road worker safety. Collaborating with 18 supply chain companies across the highways industry, such as Amey, Balfour Beatty and Skanska, Highways England has spear-headed the creation and production of a short video aimed at the public to educate them that driving into roadworks puts construction and maintenance workers at risk.

The video is also accompanied by a further 13 short films produced by Highways England’s supply chain partners. Aimed at construction and maintenance roadworkers, they illustrate what to do if someone drives (or walks) into works. These videos are being used in training and briefings on sites to help keep the roadworkers on site safe from incursions.

“Worse still, we have an actual collision with a traffic management vehicle every four or so months. Each one of these results in injuries to our people and it is generally the case that the physical injuries heal far quicker than the mental health ones.

“I would not ask my kids to drive an impact protection vehicle so I do struggle asking my colleagues to. Hence this unprecedented collaboration by the Highways sector in raising awareness is so critical in helping to eliminate the risk to the people that maintain our road network to keep the country connected.

“A few moments lapse of concentration could be life changing.”

Highways England is urging all roadworkers to report any incidents of incursion or abuse using their companies existing methods for near miss reporting.

Highways England has changed the way it is working on two motorway upgrades - cutting the length of time the roadworks will be running.

Highways England has launched a new anti-tailgating campaign to encourage drivers to keep a safe distance from the car in front.

Highways England and Network Rail are working more closely together to help establish more parkway stations across the UK and reduce congestion in town centres.