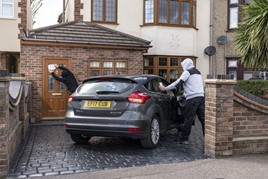 For businesses with more than 100 vehicles, the cost is even higher, with the data suggesting fleets lose, on average, £21,000 each year.

The study, which was conducted by Censuswide and generated by interviews held with 409 fleet decision-makers that operate fleets of between three and 500 vehicles, also revealed that two in five (40%) fleets had vehicles stolen that could not be recovered in the past year, while 45% experienced theft of assets such as tools, equipment, IT or cargo.

Theft was shown to hurt organisations of all sizes, with almost two thirds (62%) of fleet-based businesses with more than 100 vehicles experiencing a theft in which vehicles or assets were unable to be recovered in the past 12 months.  On average, fleets of this size are losing 1.92 vehicles per year.

Verizon Connect says that a lack of tracking or inability to immobilise vehicles are potential contributors to the problem.

The report found that GPS asset tracking devices, which can play a significant role in helping to recover stolen assets, are used in only half (52%) of fleet vehicles.

Fewer still were shown to use GPS tracking on portable assets such as IT equipment and tools (32%), construction equipment (24%) and on cargo pallets (21%).

Dashcams are one such tool that can reduce the risk of theft and help recover vehicles should one occur. The study indicated that close to a third (31%) of fleet-based businesses now use dashcams as a tool to assist with these efforts.

By providing evidence of theft through in-cab footage made available to managers via fleet management platforms, dashcams can act as a deterrent and corroborate insurance claims in the event of a vehicle being stolen.

Many platforms also now offer immobilisation functionalities, which fleet managers can use to remotely shut down vehicles and prevent unauthorised use.

Derek Bryan, vice president, EMEA, Verizon Connect, says it is possible for fleet managers to do more to protect their business from opportunists with the right technology.

“Vehicles and equipment are one of the biggest overheads of any fleet, so investing in technology to prevent theft is one of the most effective ways to save a business from the administrative and financial costs associated with stolen assets,” he explained.

“Fleet management technologies can not only track the location and status of a vehicle but can also remotely disable a vehicle’s ignition once the vehicle’s engine has been shut off, effectively stopping vehicle misuse in near real-time.”

Separate research from Tracker, published earlier this year, revealed that more cars were stolen and recovered in London than in any other region across 2020.

The Tracker analysis also reported another annual increase in keyless car thefts, now standing at an all-time high of 93%.

Fleets are again being urged to be extra vigilant following the rise in catalytic converter thefts.