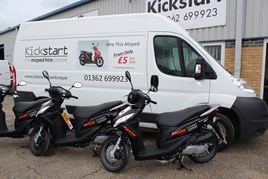 Kickstart, the UK’s largest Wheels to Work scheme, has kitted out its 300 strong moped fleet with CST tyres from Maxxis.

The not for profit organisation, which offers an affordable moped rental service to people across Norfolk, Suffolk and Cambridgeshire who lack suitable public or private transport, made the switch from Michelin.

Barry Lynes, rider co-ordinator at Kickstart, said: “We’ve tried out most tyre brands over the years but operating as a charity means we have to be meticulous about delivering a value for money service to our riders and running an incredibly efficient fleet operation.

“When our testing demonstrated that the Maxxis tyre more than held its own against some of the more expensive European premium brands, yet was set at a more affordable price point, deciding to switch from Michelin to Maxxis was the logical thing to do.

“Other brands of tyres we’ve used previously have only managed 3, 500 miles before they need replacing. The Maxxis CST tyre lasts for 5,000 miles, which incidentally is also our service interval. So, as a result of moving across to Maxxis we operate a more efficient workshop, have fewer mopeds off the road, which increases availability to riders in need of transport to sustain employment. Put simply, they’re great tyres and fanatic value to boot.”

Rob Sheldon, sales manager for Maxxis’ motorcycle division, believes the brand is going through a transformative phase and that the latest partnership with Kickstart is proof.

“Maxxis has traditionally been viewed as value-for-money tyre option but, thanks to investment in research and development over recent years, Maxxis has earnt its place among the premium European tyre brands and is regularly selected as original equipment by a number of leading manufacturers," he said.

"Being chosen by Kickstart on the back of an evidence-based approach to testing a range of tyre brands on durability, puncture resistance and grip just goes to show that Maxxis means business when it comes to refusing to compromise on quality."