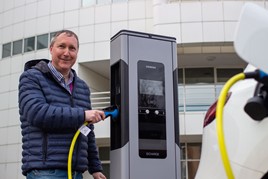 Siemens has become the UK’s biggest operator of end-user plug-in hybrid company cars, according to data from the Fleet200, with more than half its 2,300-strong car fleet now running on electric technology.

It has been a rapid transformation for the business, which introduced its first plug-in hybrid (PHEV) just six years ago, while its first pure electric company cars arrived in 2017.

Meanwhile, its current car order book is 80% PHEV and 6% BEV. Within the next couple of months, the CO2 emissions average for the entire fleet, including the 900 light commercial vehicles, will drop below 100g/km.

“Data is key – we support car driver travel patterns analysis which provides data for drivers helping them to decide if they could switch to electric,” he said. “By the end of this year, we will probably have 300 full electric cars.”

The plug-in hybrids are proving to be a stepping-stone to full electric, enabling employees to get used to charging their vehicle without worrying about range. Of the 80 drivers with a BEV, more than 80% previously had a PHEV.

“We are definitely seeing PHEV drivers move to full electric on their next car change,” Warburton said.

Read the full story on Siemen’s electric vehicle journey in the March edition of Fleet News.