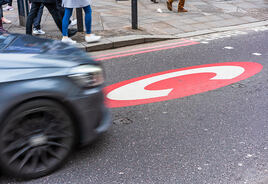 The PHEV exemption was withdrawn today (Monday, October 25) to coincide with the launch of London’s expanded ultra-low emission zone (ULEZ).

Transport for London (TfL) estimates that 100,000 cars, 35,000 vans and 3,000 lorries could potentially be affected by the tighter standards in the expanded area every day.

Speaking at a Cross River Partnership webinar on the ULEZ expansion, Tanya Ferguson, senior policy and programmes officer for the Greater London Authority (GLA), said: “We’re ending the cleaner vehicle discount for plug-in hybrids in recognition of the point that vehicles (irrespective of emissions) contribute to congestion and we want to be encouraging a shift to walking, cycling and public transport.”

Prior to the change, only vehicles that emitted no more than 75g/km of CO2 and had a minimum 20-mile zero emission capable range, qualified for the 100% cleaner vehicle discount.

Now, only battery electric or hydrogen fuel cell vehicles are eligible for the cleaner vehicle discount, which Transport for London (TfL) says will be scrapped altogether from December 25, 2025.

From this date, it says all vehicle owners, unless in receipt of another discount or exemption, will need to pay to enter the congestion charge zone during charging hours.

Currently, the congestion charge, which is in addition to the ULEZ charge, operates from 7am to 10pm, seven days a week, with drivers paying £15 to enter the zone.

The congestion charge zone fee was increased by 30%, from £11.50 a day, and the hours of operation extended by four hours a day and applied at weekends for the first time from June 2020, as a result of a funding agreement between the Government and TfL.

However, TfL is running a consultation on the future operation of the congestion charge, with the main proposals including no charges in the evenings to support London’s recovery, operating between 12-6pm on weekends and retaining the current charge level of £15.