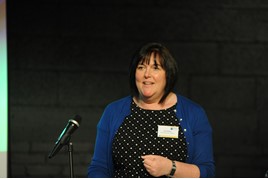 Kate Wilson had just passed two decades at Northumbrian Water Group working in various compliance roles when she was asked to look at the vehicle fleet for an audit.

By her own admission she “didn’t know a lot about vans”, but within two months, her recommendation was that the organisation needed a full-time fleet manager. That was in July 2015; by the August, the job was hers.

“I see most things in black and white – apart from my football team, which is red and white!” Wilson (pictured) says. “I’m a two-feet-in person; I try to fix the world in one go, but it became obvious that I wouldn’t be able to do that in fleet. So I had to break it down.”

She decided to consolidate the data into three key reports: financial outlay, short-term hire and O-licence.

Recognising the need for continuous and efficient control, Wilson enrolled on a transport manager CPC training course. She has mixed views about its usefulness.

One of her initial challenges was raising awareness of the fleet and its drivers at a senior level within Northumbrian Water. The company operates 167 trucks, almost 800 vans and 250 cars – a significant part of the business.

“Three years ago, we got from A to B on ‘pixie dust’,” she quips. “Now the business understands the role of our drivers and that we put them behind the wheel of a dangerous vehicle.

“I ensured our directors know about corporate governance. Do they understand their obligations on risk management and safety? They do now.”

Wilson set up a fleet executive group, consisting of key stakeholders including drivers. It meets quarterly to discuss issues and concerns. She also has an O-licence fleet group which focuses on compliance issues.

Vehicle checks presented a particular challenge, one that took around two years to resolve.

“As a business, I want drivers to check their vehicles,” Wilson says. However, the unions questioned why drivers should spend half an hour before they start work checking their vehicles.

Agreement was finally reached, but the process will soon become much slicker thanks to fleet software supplier Jaama.

It has developed a defect reporting app that feeds the information with pictures directly into Northumbrian Water’s maintenance provider. If further action is required, the provider will contact the driver to book the vehicle in.

The app will be rolled out from January and will save £10 on each defect book. In addition, drivers will be able to see that the fault has been fixed, which will encourage them to use the system.

Suppliers play a key role in providing advice and guidance, as does Freight Transport Association. Among them is funder VLS, a joint venture between Northumbrian Water and Northern Powergrid, racking provider Tevo and Ctrack telematics. The latter two are more recent appointments.

Northumbrian Water changed telematics supplier because it wanted a system that the drivers could see, to satisfy the unions. Ctrack provides a driver app-based system.

Everyone, from the chief executive to operations managers to the job-need drivers have the app in their vehicles – including cars. Wilson was first, giving her the experience and knowledge to explain the benefits to the rest of the business.

Category three speeding (where drivers travel at 10-20% above the speed limit) has fallen, which is significant for a business that restricts its vans to 62mph. Much of the speeding had been taking place on roads with lower limits.

At the same time, the number of parking charge notices has also halved; the telematics has encouraged drivers to be more careful about where they leave their vans.

Wilson’s next project is to look at fleet utilisation, initially by identifying all vehicles which travel less than 40 miles per day. She also wants to run a ‘green fleet’ but is struggling with payloads for larger vehicles.

“The fleet sector is behind the curve, but so is the infrastructure,” she says. “We decided to take the lead, because we can all work too much in silos.”

Each year, Northumbrian Water hosts an innovation festival, bringing together more than 500 companies to discuss potential solutions to common problems. At this year’s event, held in July, one core topic focused on the future of transport for business, assessing fuels and ownership models.

As a result of the discussions, Northumbrian Water is to build five CNG plants in the north to kick-start a fuelling infrastructure.

“We want people to tell us where they should be,” Wilson says. “If we work as a fleet community, we will start to get things done.”