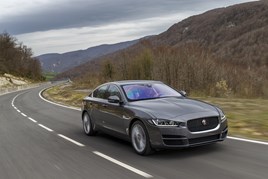 An enthusiastic response to its new model line-up has convinced Jaguar Land Rover (JLR) that it can continue its sales surge by targeting the fleet market.

As a result of an £11 billion investment plan, since being taken over by Tata in 2008, the Jaguar and Land Rover brands have enjoyed a substantial growth in sales.

Now, with an improved model line-up that includes Jaguar XE, XF and performance crossover F-Pace, as well as Land Rover Evoque and Discovery, the manufacturer is keen to build on that success.

“We’re on the crest of a wave,” said UK sales director Chris Newitt, “but we know we can do more and the next few years look set to be just as exciting as we continue to roll out distinctive and innovative new vehicles.”

Land Rover recorded an even higher increase, with new car registrations up 94% on November 2014.

Speaking at a business briefing, Newitt revealed that the Midlands-based manufacturer has already sold out of the launch edition of the F-Pace, Jaguar’s first sport utility that will be launched next year.

Potential global customers have already configured more than 100,000 examples of the car on the company’s website.

“This all adds up to a fantastic sign of the confidence people in all markets have in our new products,” he told Fleet News.

“However, we’re certainly not regarding this as an excuse for complacency.

“Our owners have put major resource into making sure our next generation cars are fully competitive in terms  of vehicle operating costs, emissions, insurance ratings and  residual values.

“We are doing this to ensure our cars deliver the best ownership experience for fleet and business motorists as well as maintaining the dynamism that differentiates us from our competitors.

“While we remain strong in the retail sector – that’s what you’d expect in our home market – there’s no doubt that the corporate arena represents a big opportunity for growth and in the sectors where we compete with BMW, Audi and Mercedes-Benz, we are opening up gaps.”

Newitt described JLR as “relatively small” players in the corporate market in 2014, but claimed the brands had made substantial gains this year, which included winning significant supply contracts.

“What happened wasn’t entirely due to internal circumstances, but things had to change by that time because we had an old product range compared with our competitors and the product we were selling was very top end.

“Instead of relying on the old world for business, we now have a much better balanced portfolio that allows us to ride any global economic  fluctuations.”

Every model has been changed and the only car that hasn’t been refreshed is the F-Type.

“JLR is now the UK’s number one manufacturing investor and having a platform like that is a significant factor in allowing us to open up new channels,” concluded Newitt.

“It’s also of great importance for another reason: we now want 75% of our customers to stay loyal to our brands.”