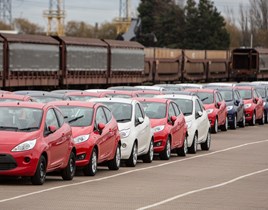 Ford has refocused its fleet sales activity on profitable business, which has seen the manufacturer reduce its penetration in short-cycle rental and exit high volume/high discount corporate deals.

Andy Barratt, Ford of Britain chairman and chief executive, told Fleet News that the carmaker had cut daily rental business over the past decade (from around 40% of fleet registrations to 24%, although it has risen slightly year-to-date in 2015).

But he also took a swipe at some rival manufacturers for manipulating the registration figures provided to the Society of Motor Manufacturers and Traders (SMMT).

“The stats don’t tell the whole truth; manufacturers don’t code them the same way,” he said.

“We are at the lower end of the spectrum in short-cycle; I’m pleased with our business cycle.”

Ford has also capped its Motability volumes, in the face of growing competition, and has sought to reduce its own captive registrations.

Barratt said: “Corporate fleet and contract hire is very competitive. We don’t do pack deals and big volume; we have tried to organically grow our business.”

Despite professing himself “pleased” with Ford’s performance this year, claiming the carmaker is “above our objectives in terms of volume”, he admitted Ford had been slow to recognise the shift in the family car segment towards SUVs.

“SUVs are growing and we didn’t have supply. Now we have Ecosport and Kuga and they have outsold our objectives every month – and in a high spec,” he said.

“It’s where the market is,” he explained. “We now have three strong SUVs so we will be in a good position to grow next year.”

Barratt predicts 2016 registrations could exceed 2015 – itself one of the strongest years on record, despite the fourth quarter slowdown.

PCPs are driving demand in the retail market – they account for 80% of Ford’s retail sales – while business confidence is seeing more companies refresh car and van fleets.

Barratt said: “It’s an efficient way of funding a car. Most people that have one don’t want to go back.”

However, Barratt is wary about the impact of PCPs on residual values, as it removes some used car buyers from the market and puts them on similar replacement cycles  for new cars to fleets.

He believes a softening of residuals is inevitable over the next couple of years.

Ford is gearing up for a strong van market next year – buoyed by more civil engineering projects, pressure to build more houses, greater demand for home deliveries, etc. – with a new engine that will offer “improvements that will drive more considerations through”.

“Vans will have similar growth into 2016,” Barratt said. “We are seeing more customers using input from drivers to help them select vehicles and this is where we score highly.”

He added: “It will be interesting to see, with our 1.0-litre Ecoboost-powered Transit Connect, how many come back and go for this vehicle with emissions zones.”

However, Ford has not seen any drop-off in demand for its diesel product as a consequence of the ongoing Volkswagen Group scandal (the company was quick to issue a statement denying any use of so-called defeat devices).

Its customer centre has received just eight enquiries about diesel from a customer base of five million.

Complementing Ford’s van aspirations is the introduction of mobile servicing for commercial vehicles, which will be available at every Transit centre by the end of 2016.

It won’t just be an offering for vans either, according to Barratt, although they are the main target.

“Our concept is to do routine servicing while the customer is still working and earning money,” he said.

“We also agree to service and do warranty work at customers’ premises – it’s multifaceted.”

He added: “We may expand to be an emergency call out service for remedial work.

“That may be the next iteration and we are working with the dealer council on this.”