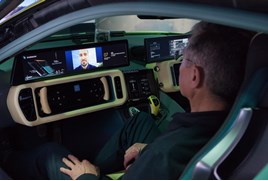 Automotive used to be a bit-part player at the annual technology tradeshow, but since the advent of autonomous driving and connected cars, manufacturers are using it to give fleets a glimpse of the future.
Volkswagen used the event to reveal two concept cars: a pure electric mini-van, called the Budd-e, and a fully electric Golf – the e-Golf Touch.

The Budd-e, which is the first vehicle to be designed around a new purpose-built electric drive platform, has a flat, space-saving battery that fills almost the entire vehicle floor (similar to the Tesla Model S). It powers two electric motors, which drive both of the axles.

Volkswagen says it delivers a range of up to 333 miles in Europe’s official NEDC test when fully charged, while real world driving suggests a range closer to 230 miles.

No details were given on the range of the e-Golf Touch which was used to showcase the carmaker’s next generation of media systems that are due to start arriving on its production cars later this year.
“We are doing more than just putting electric power trains in our conventional models,” said Volkswagen brand CEO Herbert Deiss.

The Budd-e’s doors open with a voice command, while a refrigerated tray in the rear bumper can be opened by a digital key to accept shopping deliveries and parcels without the driver being required.
Deiss said the Budd-e could become a reality by the end of the decade.

Kia used the technology show to announce its plans to have a fully autonomous car on the road by 2030.

In the meantime, it will slowly introduce self-driving aspects via its new Drive Wise sub-brand.

Drive Wise technologies on display at CES 2016 included autonomous driving functions for both motorway and in town. Kia also showcased an emergency stop system which detects if the driver takes their eyes off the road for too long and automatically brings the car to a stop on the side of road.

Tae-Won Lim, senior vice president at the central advanced research and engineering institute of Hyundai Motor Group, said: “Although the first marketable fully-autonomous car from Kia will not be available in the immediate future, the work our R&D teams are currently doing to develop our range of Drive Wise technologies is already improving on-road safety and driver assistance.”

By 2020, Kia aims to introduce its first partially-autonomous car with Drive Wise technologies, building upon the current generation of driver-assistance systems.

Another manufacturer showcasing greater connectivity and EV ambitions was Audi.

The E-tron quattro concept it revealed is a pure electric sport SUV with a 95 kWh battery located between the axles which enables a range of more than 310 miles.

Meanwhile, Volvo revealed it is developing intelligent, high-bandwidth streaming capabilities with its technology partner Ericsson to cater for the autonomous car.

Anders Tylman, general manager of Volvo’s monitoring and concept center, said: “Imagine a highway full of autonomous cars with their occupants sitting back watching their favourite TV shows in high definition.
“This new way of commuting will demand new technology and a much broader bandwidth to ensure a smooth and enjoyable experience.”

Volvo research shows that almost 70% of all mobile data traffic will be from video in the coming years.

Claes Herlitz, head of automotive services at Ericsson, explained: “This requires an innovative connectivity, cloud and analytics solution that is not only capable of serving multiple moving vehicles across a highway, but also has the capacity to provide the high-quality, uninterrupted video service today’s consumer is accustomed to.”

Tylman concluded: “With our autonomous drive technology we will provide people with freedom to choose the way they commute and the content they experience.”