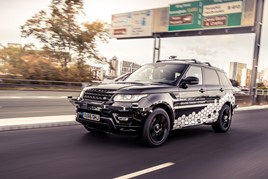 A self-driving Range Rover Sport has completed its first autonomous lap of Coventry.

The trial is part of the £20 million government-funded project, UK Autodrive, which ends this month after a three-year programme.

The Range Rover Sport, featuring adaptive cruise control and lane keep assist, was modified to include additional navigation sensors, Radar and Lidar. The vehicle can autonomously handle roundabouts, traffic lights, pedestrians, cyclists and other vehicles on complicated roads. It can also park itself.

“Our self-driving car is not impacted by the same pressure, frustrations or fatigue that a driver may experience and so it’s capable of turning a potentially very stressful situation into a completely stress-free one.”

Connected features enable vehicles to ‘talk’ to each other and to infrastructure such as traffic lights, improving safety and reducing emissions.