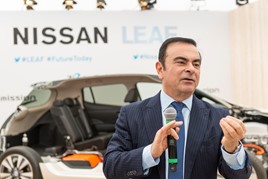 Carlos Ghosn, chairman of Nissan, could be removed from his post over financial misconduct claims.

The Japanese manufacturer said it had been conducting an internal investigation for several months which showed Ghosn had been under-reporting his pay.

"Numerous other significant acts of misconduct" including "personal use of company assets", were also found.

Nissan apologised for causing “great concern” to its shareholders and stakeholders.

The firm said it had been providing information to the Japanese Public Prosecutors Office and would continue to do so.

Nissan said it also planned to oust a senior executive Greg Kelly who had been "deeply involved" in the misconduct, reports the BBC.

He was replaced as CEO of Nissan by Hiroto Saikawa in 2017.

CARLOS Ghosn has been given the vote of approval by shareholders to become the chief executive of Renault, putting him in joint control of the French carmaker and Nissan Motor.

Hiroto Saikawa has become the new chief executive officer of Nissan, replacing Carlos Ghosn, who will continue to serve as chairman of the board of directors.