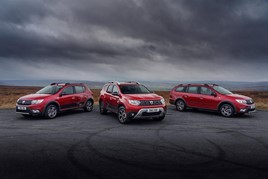 Dacia has launched a new top-of-the-range Techroad trim level, which now available to order with deliveries from April.

Revealed at the Geneva Motor Show in March, the cross-range special edition is available on Duster, Logan MCV Stepway and Sandero Stepway.

On the outside the Techroad editions on the Sandero Stepway and Duster feature special side decals with a grey and red motif and red detailing on the door mirror housings.

A red centre cap also features on the new two-tone 16-inch wheels for the Stepway models and 17-inch diamond-cut alloy wheels on Duster. Special Techroad badging can also be seen on the bodywork on all three models.

On the inside the Techroad boasts unique upholstery; the seats feature red and grey detailing and stitching, plus the ‘Stepway’ and ‘Duster’ logos embroidered into the fabric in the same colour on the respective models. The same red detailing is on show throughout the cabin, including on the air vents, around the gear lever and the door handles and even the front and rear protective mats.

Techroad editions are priced from £11,660 for the Sandero Stepway, £660 more than the equivalent Comfort version, and from £13,160 for the Logan MCV Stepway, just £665 more than the equivalent Comfort spec. The Techroad is available with the TCe 90 petrol engine on both Stepway models as well the highly efficient Blue dCi 95 diesel engine on Logan MCV Stepway.

The Duster Techroad is priced from £16,360, £660 more than the equivalent Prestige model, and is available with both the TCe 130 and 150 turbocharged petrol engines, as well as the Blue dCi 115 diesel engine in 4x2 and 4x4 configuration.