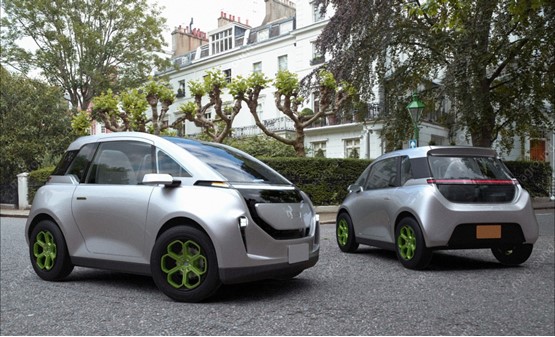 The Manchester-based company has spent the past two years designing and developing its low-cost electric vehicle, which it says can retail at the same price as an average eight-year-old hatchback - rather than competing on price with new vehicle.

Dr Anthony Keating, MeV CEO said: “Emissions free transport should not be limited to those who can afford to pay a premium. The BeeAnywhere makes electric vehicles affordable, stimulating mass adoption and offers the potential to displace millions of older polluting vehicles, especially if backed by a scrappage scheme.”

To create the BeeAnywhere, MeV has combined the expertise of the National Centre for Motorsport Engineering at the University of Bolton with advanced composites from the University of Manchester’s Graphene Engineering and Innovation Centre. The resulting chassis design and composite body allows the vehicles to be assembled from a minimum of parts, significantly reducing production and component costs.

The BeeAnywhere has been specifically designed as a two-seat urban vehicle, controlled via the user’s smart phone and with the comfort, range and performance demanded by the urban environment.  The company is currently building pre-production vehicles.

MeV was founded in 2019 by Keating, of Keating Supercars, and Tim Harper, a  former European Space Agency engineer, who has founded a number of tech companies ranging from scientific instruments to water filtration.

The team says it tested several small electric vehicles over thousands of miles in order to understand how to design a vehicle to be highly efficient, low cost and easily maintained.

By combing their knowledge of automotive engineering and advanced materials the team realised that there was an opportunity to design an electric vehicle from the ground up, specifically optimised for low cost production. The reduction of the complexity seen in traditional vehicles combined with the use of advanced materials allowed the BeeAnywhere to be designed for minimum maintenance and maximum recyclability.

MeV has spent the past year working with a team of automotive designers and engineers to improve the final design, with assembly, production and end of life recyclability taken into account from day one.

Details about the powertrain, battery or range are yet to be confirmed.

Citroen has unveiled the new Ami, an electric city car that will cost around £5,000.

Fiat’s next-generation 500 city car will be fully electric, with a range of 200 miles.