Coronavirus: Audi to restart car production by end of April 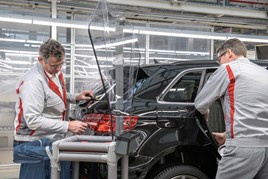 Audi will restart car production at its plants in Europe during the coming weeks, with ‘normality’ expected by the end of the month.

The company announced the temporary suspension of production at its European sites in mid-March due to supply bottlenecks and a drop in demand due to the Coronavirus pandemic.

Suppliers and service providers will also restart at the same time, in an effort coordinated with the Volkswagen Group.

“We will manage the restart as a joint European act,” said Board of Management member for production Peter Kössler. “This is because supply chains and production and logistics processes are closely interlinked within the Group and with partners at the international level.”

Some Volkswagen plants have already reopened, with factories in Zwickau and Bratislava (Slovakia) the first to return to normality.

Audi is following the guidelines of the Robert Koch Institute and the regulations of the health authorities of the respective country to ensure employee safety.

“The focus is on the employees, because they need a safe working environment. Audi teams of experts have therefore adapted processes with a view to health protection in consultation with the specialist departments and works councils. I would like to thank all Audi employees and our partners around the world for their flexibility and joint efforts in times like these,” Kössler added.

There will be a package of measures in place to ensure that the employees’ health is protected,  including clear rules on distance and hygiene, a modified shift system to avoid contact, and the obligation to use mouth and nose protection in areas where distances of 1.5 metres are not possible.

PSA Group has also announced a gradual restart of its facilities, including the Ellesmere Port Vauxhall plant.

Groupe PSA is implementing a new health protocol for its employees, to create the necessary conditions for a safe and gradual return to work.

Volkswagen car plants are to restart production, with factories in Zwickau and Bratislava (Slovakia) the first to open next week.