Diesel and unleaded new car registrations in Europe decreased by 59% and 62% respectively in May, new figures from Jato Dynamics suggest.

Overall, new car registrations fell by 57% in May down to 622,067 units across 27 markets – taking the cumulative results for 2020 to 3.95 million units, down by 43% year on year. Although this seems like a significant decrease, says Jato, May’s result marks a positive turning point, up from the decrease registered in April, when the volume fell by 78%. 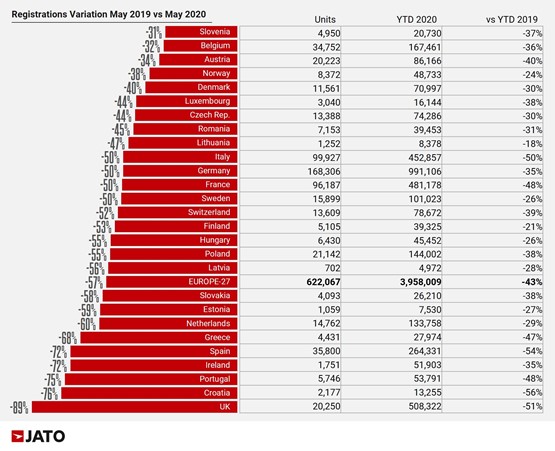 As markets across Europe started to ease lockdown restrictions, registrations started to show small signs of recovery. Munoz said: “Registrations volumes more than doubled in May, compared to the figures achieved in April.

“Despite the positive signs of recovery, a proportion of these registrations could correspond to sales that occurred prior to lockdown; therefore, we still do not have enough information to predict whether Europe will experience a ‘V’ or a ‘U’ shaped recovery.”

Nevertheless, there were a number of positive factors for the automotive industry in May, says Jato. Private registrations gained significant traction, demonstrating that the decrease seen in April was mostly driven by lockdown and fewer consumers acquiring new cars.

However, as the uptake of electric company cars increases in the UK due to favourable benefit-in-kind (BIK) tax bills and increasing vehicle availability, the June digital edition of Fleet News examines how it will become more important for organisations to introduce charge points at workplaces.

The Renault Zoe led the ranking among the electric vehicles, but the Volkswagen e-Golf was the true driver of growth in May. The Ford Puma also outsold the Toyota Yaris, and the Fiat 500 secured sixth position among hybrids – both mild hybrids.

The PHEV were led by the new Ford Kuga, clearly impacting the popularity of the Mitsubishi Outlander, says Jato.

For the second time this year, the Renault Clio led the European ranking by models, outselling the popular Volkswagen Golf.

Both models recorded double-digit declines, but its availability supported its success. Its model switch is a significant contributing factor as the latest generation is now fully available in many markets, says Jato.

In fact, the fifth generation contributed to 80% of its registrations in May. In contrast, the Volkswagen Golf, which also faced model changeovers at the same time, did not benefit from their latest generation as the company had to interrupt deliveries due to a software error in mid-May, adds Jato. The lack of availability of the new Golf – which accounted for 17% of its registrations during the month – explains the bigger decrease.

The Clio was not the only French model to occupy an important position. Thanks to a new generation, the Peugeot 208 ranked third with almost 11,000 units. 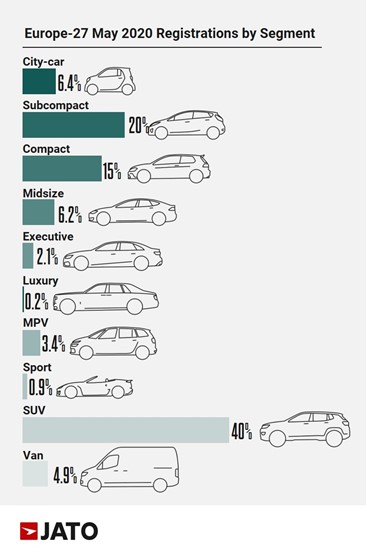 Last month, four out of 10 new cars registered were SUVs, with their volume decreased by 53% to 250,000 units in May 2020. This segment was led by the Renault Captur, Volkswagen T-Roc, Dacia Duster, Volkswagen Tiguan and Peugeot 2008.

The worst performing segments were the MPVs, city-cars, luxury sedans, compact cars and executive sedans. In fact, the MPVs registrations fell so heavily that they were outsold by the Vans (LCV-derived), now more popular among European consumers.

Medium-sized battery EVs, such as the Nissan Leaf, can be on average 14% cheaper to run than equivalent diesels today, Transport and Environment study claims.