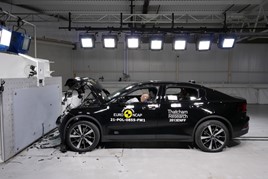 In both adult occupant and child occupant protection, only a point divides the two cars. For pedestrian protection, the Polestar, with an active bonnet, achieves an 80% score, while both cars perform well in the autonomous emergency braking systems to vulnerable road users tests.

The newcomers were awarded top marks overall in the independent safety test, alongside the Renault Arkana and the Lexus UX300e.

As the Arkana is based on the Captur, it shares that car’s 2019 five-star safety rating. UK sales of the new model will commence in July, with the first models expected on the road by September.

The Leus UX300e was added as an all-electric variant of the Lexus UX hybrid, which also tested in 2019 and achieved five stars.

Michiel van Ratingen, secretary general of Euro NCAP, said: “We are now a year on from when Covid became a global pandemic and the car industry has had a torrid twelve months. Sales are down and carmakers are having to find ways to cut costs and maximise profits. Euro NCAP is here to ensure that safety is not compromised, and it is rewarding that these two brands should place it high on their agendas. By now, safety is central to manufacturers’ strategies and they know that it is an area where consumers will not accept a drop in standards.”

The Polestar 2’s safety credentials were developed at the Volvo Safety Centre in Gothenburg.

“Volvo Cars is one of our founders and by sharing their expertise with us, safety is a core competence in our cars. This shows in the excellent Euro NCAP rating of Polestar 2,” says Thomas Ingenlath, Polestar CEO.

The Cupra Formentor is the first vehicle homologated and tested as a Cupra vehicle, rather than a Seat.

Dr Werner Tietz, executive vice-president for research and development at Cupra and Seat, said: “It’s a milestone, but a challenging one, as the safety organisation’s testing regime has changed significantly, but the CUPRA Formentor is designed to rise to the occasion.”

All the vehicles tested underwent the newer, more stringent, safety test that was outlined last year.

Cupra has revealed the Formentor, its first standalone model that will launch this year.

Sister brand Volvo’s concept car is made a reality, but it won’t be sold through dealerships

Renault is part way through a major product launch plan, which has a focus on electric technology. Next to arrive is the Arkana.