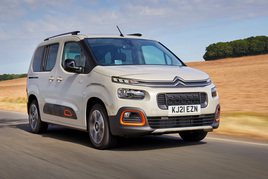 The MPV is now available with a digital instrument cluster and new automatic gear selector switch.

Other trims still available include Feel and Flair XTR, which are both offered in M (five seats) and XL (seven seats) lengths, with manual and automatic gearboxes, and petrol and Diesel engines.

The electric e-Berlingo will join the range in the UK later this year, and will be available in Feel and Flair XTR trims – and offering customers the choice of an M or XL body length to suit their needs.

It uses a 136PS electric motor connected to a 50kWh battery, and is capable of up to 174 miles from a single charge. Prices start from £29,575 OTR after the Government’s Plug-in Car Grant has been applied.

Citroen has facelifted the C3 Aircross compact SUV, intorducing a refreshed look plus some interior changes to boost practicality.

Citroen has revised the model line-up for its electric e-Spacetourer MPV, with prices now starting at £14,000 less than the previous model.