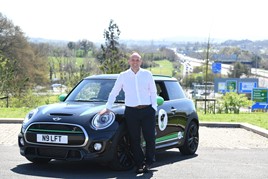 Lightfoot has announced the appointment of Kevin Hennelly as its new head of sales, following a £1 million loan from Innovate UK.

Hennelly (pictured) brings almost 10 years experience to the role and has implemented hundreds of telematics contracts spanning over 24,000 vehicle units, across a range of sectors.

He will be responsible for overseeing the national sales team’s growth as the business expands to meet demand.

Rupert Lyon Taylor, managing director of Lightfoot's fleet division, said: “Kevin has spent the last eight years working in the telematics industry and, in this time, he has sold at every level.

“He has won and managed major accounts and many of his clients have been household names.  It’s an exciting time for our business and we’re confident that Kevin will play a big part in our future growth as well as expanding our rapidly growing team.”

Hennelly said: "Telematics systems are great and offer a wealth of information, but beyond a limited deterrent effect, they only raise awareness of problems as opposed to actually solving them.

"Lightfoot has a totally different approach, solving issues at source, using real time in-cab visual and audio alerts that deliver tangible results in terms of more efficient, more cost effective and safer drivers.  Lightfoot is a game changer and I wanted to be part of it."

Lightfoot’s expansion plans have been given a further boost in the last month with the award of the first £1 million Innovation Loan from Innovate UK, the Government’s innovation agency.

The loan will enable the company to include a “boosted” driver rewards platform, including a new generation of in-vehicle hardware.

It will also play a role in its continued growth as its employee numbers have doubled and as a result, will expand to larger premises in Chudleigh later this year supported by funding from the Regional Growth Fund (RGF).

Funding from Innovate UK will support research and development as company looks to reach and inspire a new generation of better drivers.