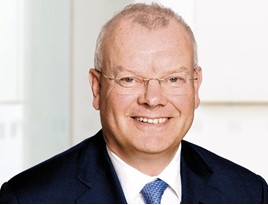 Tributes have been paid to former Ford chief executive Professor Richard Parry-Jones CBE, following his sudden death in a “tragic incident” near his Wales home.

Marshall chief executive Daksh Gupta and Ford chief executive Bill Ford wee among those who paid tribute to the Ford group vice-president of global product development and chief technical officer. He was responsible for the development and launch of a string of iconic cars, including: the Escort RS, the Ka, the Fiesta, the Mondeo and the Focus.

Parry Jones was also worked with Jaguar Land Rover (JLR) and Aston Martin, having oversight of model launches, and was recently appointed to the board of Aston Martin whom he had advised for many years.

Marshall said in a statement: “He was so well respected and many of the world’s leading automotive executives turned to Richard for his advice and counsel.”

Paying his own personal tribute to Parry-Jones, Gupta said: “Richard was not only an exemplary chairman but a great mentor and friend to me.

“He was very passionate about Marshall and was excited about the future prospects for the Group.

“We were so fortunate to have him as our chairman and I will miss him enormously; it is a tragedy that we, and the wider industry, have lost him so soon.”

Ford executive chairman Bill Ford described Mr Parry-Jones as a "rare talent who left an indelible mark on Ford and the industry".

He added: "His passion for great cars and love of motoring inspired legions of engineers and enthusiasts in Europe and around the world.

"Richard will be deeply missed and our heart goes out to his family and loved ones."

Parry-Jones was the architect and led the UK Automotive Council  from 2009, seeking to bring the industry and government behind a renaissance for the UK auto sector through a comprehensive industrial strategy.

Graham Hoare, chairman and executive director – Business Transformation at Ford of Britain and chair of the UK Automotive Council, added: “Richard was a pillar of the automotive industry: inspiring and respected across the breadth of the sector, and by his colleagues and friends in government.

“His leadership was instrumental in our success and inspiring the vibrant automotive community that we have today. He will be greatly missed by those that had the pleasure to work with him. Our thoughts are with his family at this difficult time.”

Parry-Jones was credited for playing a key role in shaping the net-zero automotive agenda in the UK. He was one of the driving forces behind the creation of the Advanced Propulsion Centre (APC) in 2013.

Ian Constance, CEO of the APC, said: “Richard was a real inspiration for many of us who had the good fortune to have worked closely with him. He continued to support and guide us at the APC right up until his passing.

“An amazing automotive engineer, demanding that design and development starts and always comes back to the fundamental physics, while never losing sight that the driver has to be at the core of the product.

“His ability to absorb the specifics while always seeing and bringing everyone back to the bigger picture, made him someone whose insight and opinion was in demand by boards, governments and individuals.

“It set the tone for what we do at APC and laid the foundations for net-zero propulsion that we and the automotive industry must continue to build on.”