Are we won over by the i-MiEV? 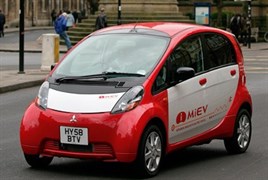 For the last few days I’ve been driving to and from the office in an electric car.

They’ve been in the news a lot recently, especially since Nissan announced prices in May of its Leaf electric car due on sale in 2011.

It uses a 63bhp electric motor driving the rear wheels, and has a maximum torque output of 133lb-ft – perhaps similar to a small turbodiesel engine.

Maximum speed is stated as 81mph and 0-62mph is covered in 13 seconds. Those figures sound pretty normal, but there are currently two hurdles to overcome for anyone considering an electric car.

One is limited range; the other is the cost of purchase.

No one is forcing electric vehicles on people who expect to cover more than 100 miles a day. Most car manufacturers accept that electric vehicles will be one method of powering vehicles alongside petrol, diesel, hybrids and plug-in hybrids.

However, my first experience with the i-MiEV made me think the 100 miles claim was rather far fetched.

The car was delivered to our office with the battery only three-quarters charged. Well, with a potential 75 miles range this would be more than enough for my 23-mile journey home.

The charge meter in the i-MiEV has 16 blocks when full and I set off from the office with 12 intact. I used seven on my route home which was made up of six miles of the A1 with the remainder mainly fast rural roads.

I live in a remote village with no shops so the next job was to go to the supermarket five miles away with the remaining range.

But three miles down the road I was down to three blocks on the energy display and a battery warning light appeared.

I went home and plugged the i-MiEV into the mains in the garage.

I discovered the I-MiEV has an ‘eco’ mode that restricts power delivery and helps stretch the range further. It left me slightly disappointed because I was enjoying the i-MiEV’s strong response on the move. It felt a bit like an escaped dodgem car.

The drive to the office the following day left plenty of energy for the journey home.

I posted my experiences on my Twitter account and referred to ‘range anxiety’ – often used in EV circles.

We live in an electronic age, and my tweets were spotted by Tomoki Yanagawa, vice-president for sales, marketing and corporate planning at Mitsubishi Canada.

He contacted me and offered advice on maximising the range, which was welcome.

On day three I chose a route to work that took in driving through Peterborough city centre, and the journey used just four blocks on the charge meter.

This is much more acceptable and equates to about five miles per block on the gauge, and I’m sure with regular urban use 80 miles or more could be possible from a full charge.

The other potential issue is cost of purchase. The official on-the-road price of the Mitsubishi i-MiEV is £38,699, and although the previous government promised a subsidy of up to £5,000 on electric vehicles from 2011, the present government is reviewing whether this commitment should go ahead.

This seems a little steep, for a small car, even with a running cost advantage over conventional fuel cars of about £2 for a full charge and possible 100-mile range compared with about £7 for a similar distance in a good diesel or petrol-electric hybrid.

However, the price of the Nissan Leaf due in 2011 is set at £28,350 or £23,350 if the subsidy remains in place, and don’t be surprised if Mitsubishi is able to bring the price of the i-MiEV down in future to take account of the more competitive market.

It’s a significant outlay and there are still many unresolved issues over whether the manufacturer will provide a leasing scheme for the battery or if – as Mitsubishi and Nissan have already confirmed – it will be sold as part of the car.

And there's the old chestnut of how ‘green’ the energy it uses is, when the national grid is still powered by such a large proportion of fossil fuel power stations.

That’s another discussion, but as a first step towards mainstream electric vehicles in the UK, the i-MiEV may be a compromise, but some of its shortcomings are plain to see.

Assuming these are also obvious to the manufacturers, and they will invest in addressing them, it’s a good indicator of how these vehicles could develop over the next few years.