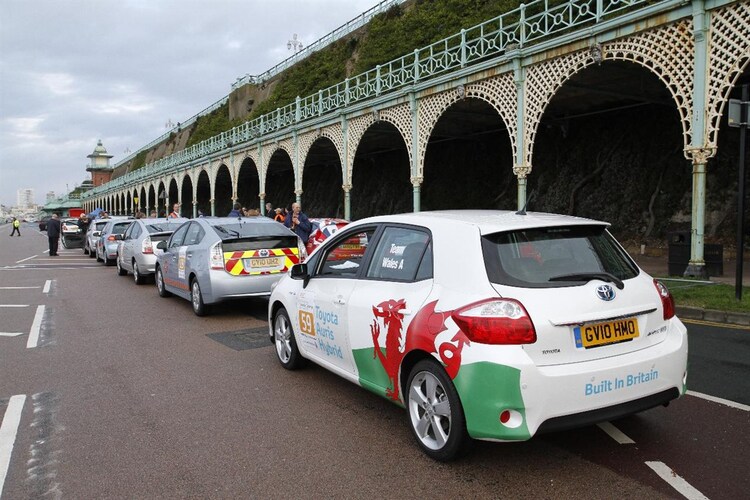 A few weeks ago you might have read here that I was representing Fleet News (and Toyota) in the RAC Future Car Challenge.

More than 60 vehicles using current and future low or zero-emissions technology took part in a run from Brighton to central London.

Aided and abetted by occasional Fleet News contributor John Slavin, we were enlisted to drive a Toyota Auris Hybrid.

Toyota had entered many in the event, including all three generations of the Prius, while other manufacturers, including Ford, Vauxhall, Volkswagen, BMW, Mercedes-Benz, Skoda and Honda.

As well as the hybrids, there were internal combustion engine cars, battery electric and hydrogen fuel cell vehicles.

Much of the field were genuine production cars already on sale or available very soon. Some were prototypes.

Within Toyota, there was a mini ‘cup of nations’ with participants from England, Scotland, Wales and Northern Ireland competing to achieve the best fuel consumption on the 57-miles route in an Auris Hybrid.

One of the England cars was best with an indicated 76mpg for the trip, although my own figure of 71.3mpg was better than our T Spirit spec car’s official combined figure of 70.4mpg.

However, there were reports of a very slow Skoda Fabia Greenline achieving 107mpg.

At the end after all the cars lined up alongside pre-1905 vehicles involved in the London to Brighton Veteran Car Run.

Trophies were presented for class wins in more than a dozen different categories, and those victories weren’t necessarily based on hard scientific data.

The RAC had proposed a method of comparing each of the different types of power sources used by the various vehicles and calculate the energy used so we could all be compared in equal terms.

Many of us would have wanted to know which of these fuels used the least amount of energy and, which of the fuels will have the least environmental impact in the long term.

Although the vehicles were various sizes from the diminutive Gordon Murray Design T.25 to the electric Zytek Mercedes-Benz Vito Taxi, we would have had a decent idea of how things stood.

Unfortunately, the RAC says: “All vehicle measured data is protected and provided to the entrant only.”

Surely the entrants who own the prototypes that were involved would have carried out many months of development of the vehicles would have a fair ides of the energy they used, and probably have far better quality data recorded in far more controlled environments than the A23.

While the production vehicles would have been evaluated for many millions of miles before they were launched.

So a well publicised event – thanks in part by the number of journalists and celebrity drivers invited to take part – that has generated a vast amount of column inches at least online, and which would have given a great indicator of which fuel was the ‘greenest’ had needlessly shrouded its own results in mystery.