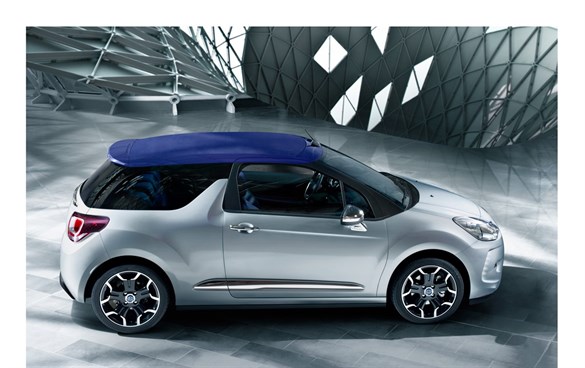 The DS3 is an important car in Citroen’s fleet ambitions; of the 36,000 DS3s they sold in the UK last year, fleet accounted for 35%. That’s an impressive performance but the real reason why the DS range is so crucial is that around 60% of those buying one are new to the marque.

The DS3 Cabrio builds on the success of the original hatchback, adding a healthy dose of fresh air into the (highly complex) equation. The plethora of options to customize the car remain, supplemented by a fabric roof that slides back in a similar fashion to the old 2CV’s, leaving the side body work in place. This gives either a sense of cosy snugness or claustrophobia, depending on taste, but it is cheaper to manufacture than re-engineering a full convertible body shell and retains a lot of the closed car’s rigidity. It’s the lighter option too and the DS3 Cabrio only weighs 25kgs more than the hatchback.

Penalties? Surprisingly few, the main one being a tiny slot of a boot opening, although it is the largest in its class and does hinge in an appealing and novel fashion… 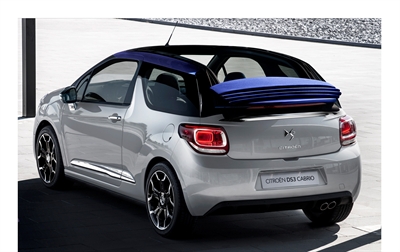 The fabric roof, engineered by Webasto and available in three colours, is a substantial affair comprising three layers making the Cabrio reasonably quiet at speed. It can be opened and closed in around 16 seconds and can be operated at speeds of up to 75mph enabling owners to take advantage of even the briefest spell of sun.

Only petrol engines are available at the moment: the VTi 82, a 1.2-litre, three cylinder producing 82bhp; the VTi 120 developing 120 bhp; and the range-topping, turbocharged THP 155 that yields 156 bhp. Only the latter engine was available on the launch, although we did learn that a manual diesel option is to be introduced within 9-12 months. 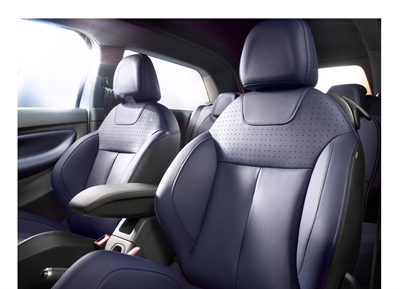 The Cabrio drives just like the hatchback, which is to say well but for some crashing over larger potholes and some scrabbling for traction when accelerating hard out of tight corners. The high-powered engine pulls well, but the car’s raison d'être is broader than mere performance and the Cabrio is a fine addition to the DS range and is one that will surely steal volume from the Mini Convertible and Fiat 500C.