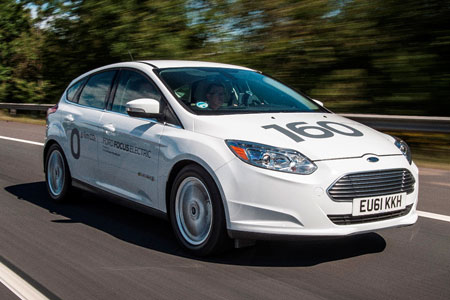 Ford’s foray into ultra-low emission vehicles hasn’t had the smoothest of starts, as Azure Electric, the company behind the powertrain for the Transit Connect EV suffered financial problems this year.

So with just a handful of electric Connects on the road – GE Capital still has a couple of well used demonstrators on its fleet – it would be understandable if Ford bosses were nervous about the next steps, not least because the company’s commitment to making its range greener was outlined last year by its executive chairman.

At the Ford of Britain centenary dinner in May 2012, Bill Ford said there would be five hybrid and electric vehicles coming by 2013, one of which was the Transit Connect.

But this first obstacle hasn’t held back Ford’s ambition and the Focus Electric is on course for launch in 2013.
We had a brief opportunity to drive the North American specification car recently, but under the new ‘one Ford’ policy of global products, the most significant changes for European models will be interior trim colour choices.

The Electric Focus is distinguished from the current range by optimised aerodynamics and a new grille shape that is in line with the revised Fiesta and the 2013 Mondeo.

Ford is targeting a maximum range of 100 miles on a full charge, with a full recharge taking up to eight hours when using a standard domestic mains electricity supply, like most of the latest generation of battery electric cars.

The Focus Electric feels much like the standard car from behind the wheel with a few tell-tale signs about how it’s powered in the instrument panel. There’s punchy performance when required, accompanied by silence.

Pricing will be key when the car becomes available, but the Focus will do a great deal to help establish the electric vehicle as a viable niche among urban-based fleet operators.