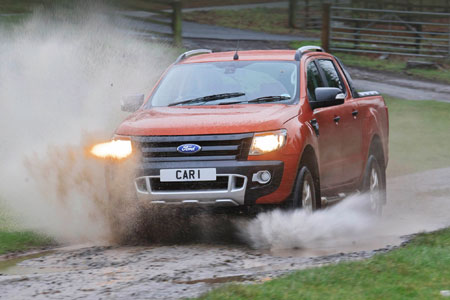 In recent years Japanese manufacturers have dominated the pick-up truck market in the UK, but a fightback is underway. Volkswagen launched the very capable Amarok double-cab in 2011, and now Ford’s new Ranger has arrived on the scene.

While the range flagship is a brawny 200bhp 3.2-litre version, Ford believes its knock-out blow will be delivered by the 150bhp 2.2 TDCi.

There will also be a 125bhp workhorse version, but Ford thinks this mid-range 150bhp version with one of the mid-grades of trim will provide the best balance as a site vehicle and capable private-miler.

The Ranger comes in three cab bodystyles – double, super and regular – and 4x2 and 4x4 drivetrains. A chassis-cab will also be available.

The pick-up has already achieved a five-star Euro NCAP rating (the only pick-up truck to do so to date), and all versions come with front, side and curtain airbags with a knee airbag for the driver.

Interior materials feel more car-like than those usually found in commercial vehicles and anyone whose fleet also includes the latest Ford cars will also recognise a few common components, but they also feel hard-wearing enough to cope with life in a truck.

While the Ranger does feel a little nose heavy on undulating surfaces without weight in the back, its steering is responsive for a pick-up truck and engine refinement is excellent, particularly in the new 2.2 TDCi.

It is fitted with a range of clever electronics making it more capable off road than before. The first thing you notice at low speed is an anti-stall facility which allows the Ranger to continue smoothly without any danger of the engine cutting out.

The driver can switch between two-wheel drive and four-wheel drive and low range with a simple selector behind the gearstick. Off-road settings automatically disengage the electronic stability control as braking individual wheels to cut power would be more hindrance at low speeds off the beaten track.

Ford is claiming the longest and largest loadbox for the single cab and a payload of up to 1,340kg, while the double-cab version also achieves a best-in-class 1,152kg payload. And 4x4 versions have a maximum towing capacity of 3,350kg, substantially higher than key rivals, while its 800mm maximum wading depth leaves no doubt that the Ranger was designed to work hard.