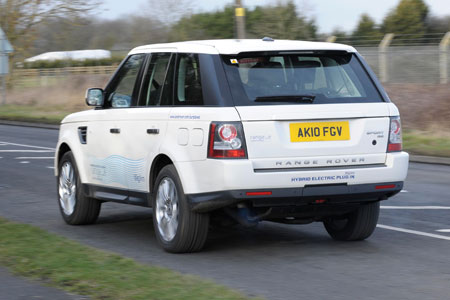 Adapt and survive is a phrase perhaps more applicable to the plight of Land Rover than it is to the rest of the car industry.

Although hostile attitudes towards 4x4s have softened with recent severe winter weather, it is unlikely to be a long-term cease-fire. Land Rover has already started acquiring greater social acceptability with front-wheel drive versions of the Freelander and the Evoque.

It has also begun showcasing the future with the Range-e prototype, a plug-in diesel-electric hybrid with up to 20 miles zero-emission range and CO2 emissions of 89g/km – equivalent to 83mpg in a diesel under the current official test cycle.

First shown at the 2011 Geneva Motor Show, the Range-e is based on the current Range Rover Sport, although the technology is still a few years away from production and will make its debut in a next-generation large Land Rover.

But this running prototype gives a very good sample of what the technology is capable of.

A full charge takes up to four hours and will allow the car to drive without running the engine, unless driving conditions (steep inclines or rapid acceleration for overtaking) require the engine to help out.

A brief drive through a suburb from the car’s launch venue was done in silence as the battery took on the task of powering the car, while out on the A-roads on the test route the torquey V6 engine was a significant presence.

When the plug-in battery charge is expired the Range-e behaves more like a conventional hybrid, with battery power intervening at low speeds as long as enough regenerative energy has been recaptured.

On the subject of conventional hybrids, the first Land Rover hybrid – minus plug-in technology – will appear in 2013 in the new Range Rover. It will be diesel fuelled, making it one of the first batch of diesel-electric cars on the roads, following Peugeot, Citroen and possibly Mercedes-Benz.

If Land Rover needs to adapt to survive, these glimpses of the not-to-distant future suggest that the brand is likely to thrive in this brave new low-carbon world.