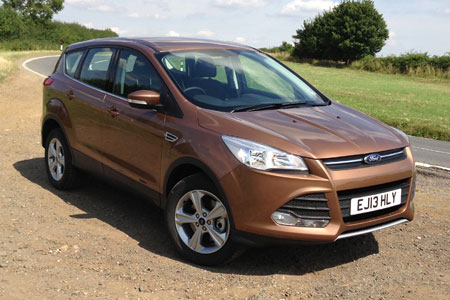 The all-new, more fuel efficient Kuga is the centrepiece of Ford’s strategy to expand in the fast-growing European SUV market.

Ford has sold more than 45,000 Kugas in the UK since it launched its first-generation model in 2008 and now hopes to build on that success with this all-new version.

It is also available with 140bhp in FWD and all-wheel drive (AWD) versions offering a combined official economy from 53.3mpg and 139g/km of CO2; and a 163bhp version that achieves fuel efficiency from 47.9mpg and 154g/km.

The front-wheel drive 140bhp 2.0 TDCi will be targeted at the user-chooser market, with emissions of 139g/km, compared to our AWD version, which produces 154g/km.

Climbing behind the wheel, the dashboard is similar to that of the current Focus or C-Max. Its layout is practical, but many of the buttons are small and some controls aren’t as intuitive as they should be.

The Kuga uses the same platform as the Focus and C-Max, matched to a new four-wheel drive system.

The Ford-engineered system evaluates road conditions every 16 milliseconds and adjusts the power split from the front wheels to back to give drivers a precise blend of handling and traction at all times, reducing wheel-spin, yaw rate error and torque steer.

It certainly combines to give you a car that feels equally at home cruising along the motorway or negotiating a winding country lane.

The handling is sharp while the ride soaks up all but the biggest of humps and bumps.

It is also more practical than its older sibling. Boot space has been boosted by an additional 46 litres with the new car boasting between 438-481 litres, depending on how far the rear seats have been reclined.

If even more room is needed the rear seats fold flat and sit flush with the boot floor, provided it is set to the higher of two levels.

Overall, Ford has given company car drivers a better car, but on a personal level its exterior appeal has lost something in the all-new version.