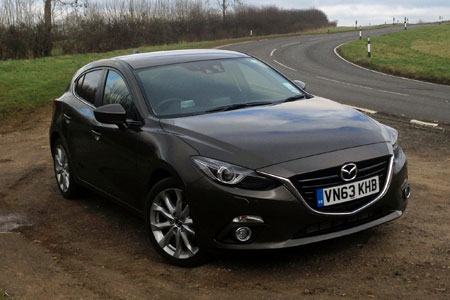 Over the last few weeks, the Mazda3 has been an interesting companion.

I took the keys after the car returned from its tyre rotation just after the 6000 mile point, and the odometer has now rolled over to 10500.

I’d been driving it just over a week when I spotted a problem – the speakers on the drivers side would randomly cut out for a few seconds at a time. There appeared to be no pattern to this, with the problem occurring on FM, iPod or Bluetooth modes.

A few days later, our local Mazda dealer duly collected the car from us, and checked all the systems and wiring, before calling at 2pm to let us know they couldn’t find anything wrong. They did, however, have a suggestion – that the sat nav was to blame.

I’m not a fan of voiced directions, so tend to mute them as soon as I hop in. In the 3, muting the sat-nav isn’t possible, so I just turned the volume of navigation down to 0. The system doesn’t realise that you’ve done this, so still mutes the right hand side as if it were giving directions.

It makes more sense when you know the root of the problem, but seems an odd way of doing it nonetheless. The fact that all volumes on navigation and music are controlled independently still leads to some confusion – pausing the music or muting it entirely would be a much preferred option.

And while I’m on the subject of in car entertainment, the Mazda’s 7-inch screen is also another source of confusion. It’s billed as a touch screen, but only certain screens and areas will react to a prod.

Instead, the BMW-style wheel near the handbrake acts as a controller – and also avoids mucky fingerprints on the display. I’m yet to be convinced that a touchscreen is as easy to use as a physical interface – once you get used to the wheel, it’s quite intuitive.