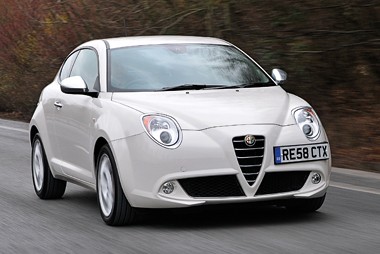 Fleet managers encouraging drivers into smaller, lower emission cars will be pleased that Alfa Romeo is downsizing too.

The MiTo is Alfa’s first foray into the supermini segment, and it is aiming to take on the MINI in the hearts and minds of user-chooser drivers.

Its looks are, well, distinctive. While this is entirely subjective, there’s no retro-rehash such as that of the MINI here. Instead, Alfa takes design cues from the amazing 8C Competizione supercar.

The main problem is that the MiTo looks good from every angle but the most important: the front. I just can’t get used to those teardrop headlamps.

But putting looks to one side, the MiTo ticks plenty of other boxes:

The interior of the 1.4 TB Veloce is immediately sporty, with a carbon-fibre look dashboard and hooded dials. It has the performance to match: 155bhp, a top speed of 134mph and 0-62mph in 8 seconds.

It comes with a DNA switch (standard on all models – the Turismo, Lusso and Veloce) allowing you to choose from dynamic, normal and all-weather modes.

When I flick it into dynamic mode and touch the throttle it’s certainly more responsive, but I’d be lying if I said all weather was noticeably different.

In general, the car handles well and gives a firm ride. For a three-door hatch there’s plenty of room in the back, but the boot loading sill is an awkward height.

Alfa Romeo is aiming the MiTo at ‘the Facebook generation’ rather than fleets, but it may be worth putting it on the
choice list if you want to offer a unique looking car that has the safety and environmental credentials to match.